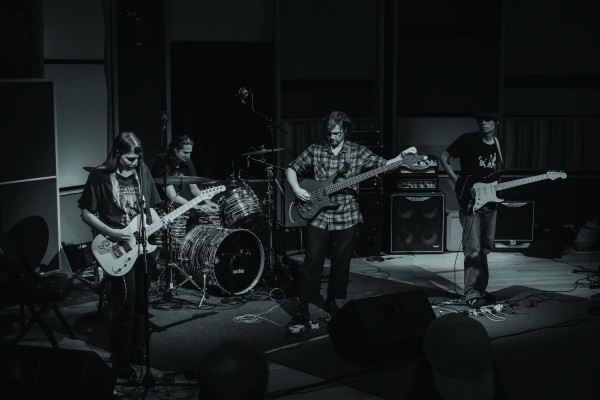 Dale Kerrigan are a local noise rock band that has been playing gigs all over NZ this year. Shlee’s vocals over a crashing backdrop gives Dale Kerrigan a distinctive sound. They recently released their first album on Spotify. Their sonic tonic consists of Shlee on guitar, her brother Josh on drums, Connor on bass, and Joel on guitar. We checked in with Shlee to see how they were going.

Dale Kerrigan started out with just Shlee, she said. “Originally Dale Kerrigan was just me (Shlee) making a bunch of songs on Garageband.” Then she started taking on new band members. “I wanted to try jamming [with other people] so I asked Josh and Connor who I live with to try it out. I was going to art school with Joel at the time and we were both interested in sound art and noise, so I asked him to come play some guitar.”

Dale Kerrigan’s latest album, Noise Bitch, came out in June this year. They recorded the album at home. “We did it over two weekends at our house with my other brother Zac recording us. We live tracked most of it on the first weekend and then did vocals and some guitar overdubs the second weekend. It was really chill and fun doing it at home.”

In terms of promoting their art and music, Shlee is into some more retro mediums as well as the usual digital platforms. “My favourite medium is posters, I wish people used them more. It’s a shame Phantom [Billstickers] have monopolised a lot of the spaces around town where you could put posters. Otherwise we just post our stuff on social media and Bandcamp and stuff. Mainly we just like playing live to people, I think that’s how the music comes across best.”

Dale have played all over NZ, but as for their best gig Shlee reckons, “it’s a tie between opening for Wax Chattels in Dunedin and playing at Whammy Bar in Auckland on the Eyegum Scenic tour with Wiri Donna.”

“At the Dunedin show with Wax Chattels we had our friend Jayde Medder from my last band Mary Berry and who currently plays in Centre Negative play guitar with us. We had three guitars and it sounded louder and crazier than usual, which I loved.”

Flat gigs are not too common for them but they are open to the idea, said Shlee. “We used to have a practice space called The Attic where we played a few party kind of things. Sometimes we play parties at our house but we haven’t done that many. We would play at peoples flats though, if they wanted us.”

Dale Kerrigan has a few gigs coming up. “Our next show is at Dive with some of our friends from Auckland, Sulfate for their Godzone album release tour. Wet Specimen are playing as well, who are hugely influential on us.” As for upcoming albums, there is plenty to get excited about. “[We’re] still in the writing process but we are planning to release two EPs soon. One super noisey one and one more songy one.”

You can find Dale Kerrigan on Facebook, and stream their music on Spotify.