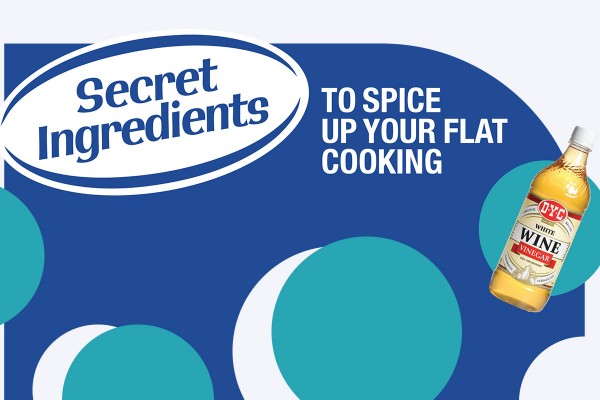 Secret Ingredients to Spice Up Your Flat Cooking

Stuck in the same dull routine of pesto pasta, nachos, KFC and Domino’s? Looking to take your flat cooking up a notch and go outside your comfort zone? This list is for you. Critic has compiled a few secret ingredients that you can use in everyday recipes to give them some extra flavour, all of which can be found at Dunedin stores without breaking the bank.

Feel free to send this to that one flatmate whose flat meals are fucking depressing.

These small, bright orange cans are a couple of bucks at New World in the Mexican section. They’re a god-send for any Mexican recipes you’re cooking. Chipotle chillies, which are jalapenos that have been smoked. They give an earthy, smoky kick to a dish. The adobo sauce both preserves the chillies and gives a vinegary, herby flavour. Next time you’re making nachos or enchiladas for the flat, chop up one of these chillies and chuck it in with your beans or meat, along with some of the sauce.

Fish sauce is essential if you’re making a Vietnamese dipping sauce, but it’s also incredibly versatile, capable of adding a bit of extra funk to any savoury dish, or even just frozen veggies. It’s made from fermented anchovies, but it won’t make your dish taste like fish unless you add way too much. Instead, it will simply add a layer of savoury, salty flavour that elevates your meal. Practically any Thai dish, from noodles to curries to soups, can be given an extra layer of complexity with a few drops of fish sauce. It is also great in various pastas, stir-fries, and Mexican dishes, or even as an ingredient in a salad dressing. If you ever see anchovies in a recipe, like in some fancier marinara [tomato sauce] recipes, feel free to replace it with a few dashes of fish sauce. Fish sauce is typically available from any supermarket or Unimart.

Fresh kaffir lime leaves are on the pricey end and will burn a hole in your wallet. However, you can buy a big bag of dried leaves for less than $10, and they will probably last you longer than however long you plan to study here. Just chuck a leaf or two in when cooking a curry, soup or stir fry. Just take it out before you eat, and your meals will have a zesty, citrusy taste. Kaffir lime leaves have a lighter flavor profile than other spices.

Like the chipotle chillies, these niche herbs can be found in the Mexican aisle of supermarkets. They don't look much like normal oregano because they're unrelated, but they do share a similar flavour. Chuck in some Mexican oregano to your dishes for a more pungent, brighter, and citrusy flavour that will take your flat nachos to a whole new level.

If you don't have chickpeas in your pantry, you're insane. They're cheap, healthy, filling, and tasty. Shakshuka and chickpeas curries slap hard, but the real secret is to fry them in olive oil, with loads of smoked paprika and cumin, a bit of cayenne pepper, and a bunch of herbs. Serve it with some pita bread and yoghurt (or tzatziki if you're feeling bougie) for a healthy and refreshing snack. You can also keep the liquid that comes in chickpea cans and use it as a vegan egg-white replacement known as aquafaba.

This one is controversial but hear me out. Monosodium glutamate is pretty harmless unless you’re railing lines of it on your kitchen bench. It has some of the same risks as salt does, so just don’t go overboard. You can buy packets of MSG at Yogiji’s market on Leith Street. Just sprinkle it in something otherwise bland, like veggies, to give them a flavour boost. MSG is really good for making relatively bland and boring food taste half-decent, so if you can’t cook, it’s an essential for the flat.

These bad boys are such a tasty vessel for chicken, tofu, or whatever leftovers you have in the fridge. If you have a rice cooker you can steam them in there, but if not, you can simply chuck them in the microwave for a minute or two. They can also be used for dessert-like fillings, such as chocolate or caramel. Honestly, the world is really your oyster with these little guys.

I assume most flats have a tub of Mae Ploy Thai Red Curry paste, but using it for more than just curry unlocks a whole world of flavour. Add a spoonful to the pan before you make fried rice or a stir-fry, or add it to a pumpkin soup for a boost of flavour and spice. It also kicks some serious ass in a sandwich with Marmite.

Don’t be afraid to buy multiple types of vinegar. In the long run they won’t really cost you much because vinegar lasts forever. Try using different types for different things. White vinegar is useful for cleaning the mould out of your shower, or for quick-pickling some vegetables. It is useful for when you want to add acidity without adding much else in the way of flavour. Any pasta you can imagine sipping white wine with, you can add a little white wine vinegar to the sauce. Red wine vinegar is great for red meats, marinades, some pastas, some salads, and anything you might want a punchy, tangy flavour in.