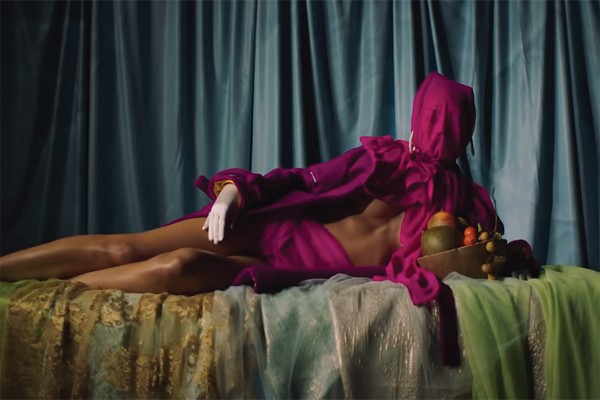 How come Australia gets an entry and we don't?

39 countries submitted a music video. Critic has never paid attention to Eurovision, but now that Australia is involved for some fucking reason, we had to. We ranked all the videos ahead of the 22 May finale across three categories: Head-boppiness, performance on-screen, and general vibe. Then we moved things around until we were happy with the results.

Eurovision isn’t a themed contest, but there were some clear themes stuck out year:

Must be a sign of the times. Without further ado:

This is the music you weren’t allowed to listen to as a kid. It’s a hard-hitting, punk-rock anthem sung by a band straight out of the early 2000s, with a bassline hard enough to crack skulls and an overtly bisexual aroma. It’s the Trainspotting aesthetic, but with black lipstick and a bit more sun. It’s awesome.

In this video, what can best be described as the 2002 Microsoft intern team are playing spark-shooting synth keyboard-guitars while a lanky Viking sings about how happy he is with his marriage. All of them are wearing onesies with 8-bit portraits on them, and their awkward as fuck dance moves have the potential to blow up on TikTok. It may be a bit of a hot take putting this at #2, but it left me in such a good mood and I just kept coming back for more.

Damn, Malta really do be feeling themselves. The horns in this make it sound a lot like Ariana’s One Less Problem, so if that’s your vibe, you’ll love this. I lost count of how many hairstyle changes there were, but there were enough to employ every stylist in Malta. Destiny, the lead singer, won junior Eurovision 2015 so she’s got some serious star-power and maybe the best voice in the line-up.

Lithuania has produced something that’s like a David Bowie cover of Toxic, and somehow, it’s the only song to sing about the stress of lockdown without being super cringe. It’s great, and their flashy yellow suits were a nice touch. Lead singer struts his white heels and invites us to dance in our rooms.

5. Latvia: The Moon is Rising

Holy shit, what is going on in Latvia? There’s fat people, skinny people, gay people, tiny people, ginger people, all kinds of people, and they’re all singing about how “the queen of the night is coming / the blood moon is rising.” It’s a Slavic, Beyonce-esque warehouse rave and it absolutely slaps. As one YouTube commenter put it: “This song makes me feel like a strong Baltic woman and I’m a middle-aged Chinese guy.”

Without getting too political here, yes, Israel is in Eurovision. This song felt like Dua Lipa produced an Ariana Grande video, and we’re here for it. Outstanding voice, moves, and overall vibe.

It’s a fear-boner, plain and simple, but it works. They picked the hottest singer in Azerbaijan, made her spooky, and gave her a banging song to dance to. A recipe for success. Many countries tried the same formula, but Azerbaijan did it best. One of the head-boppiest songs, this entry only lost points due to poor choreography.

This song is like liquor. Rough at first, but it gets easier. It’s mostly in Russian, but something about the Russian language suits this pseudo-rap quite nicely. The lead singer has maybe the most star-power of any entry and uses it to tell you that you’re strong and not to be afraid. I didn’t know that what I needed was reassurance from a strong Slavic woman, but it’s exactly what I needed.

Does everyone in Serbia have Dave Borrie’s hair? I don’t understand what they’re saying, but I feel like I agree! Super catchy, but also kinda sounds like music that will end up in the background of a Spark Ad.

Very Czar-Sheik, this one. Lots of Anastasia-style regality having some sort of servers-below-the-palace rave. Has nothing to do with Tik Tok. Keep in mind: Last time Croatia was an underdog, they won the World Cup.

The highest-ranked slow song on this list. It's beautiful, melancholic, and filled with WWII imagery of trains and uniforms. Very French. Feels like an intro to a James Bond film.

I have no idea what’s going on here. There’s a car in outer space, and then there’s really cool shots of the Swiss Alps. Major points for cinematography, negative points for confusion.

Every single geriatric Orthodox Christian in Cyprus had a stroke watching this. It’s a woman singing about how she gives her heart to the devil while a looping track of children’s voices sings “I love the Devil, I love the Devil.” Is it still blackface if the entire body is painted? Discuss.

What the fuck is going on here. There’s a car that it looks like it’s from the Oamaru steampunk collection, and the video is shot on the set of Mad Max: Winter Wonderland. There’s shots of Chernobyl, a piccolo solo, I think I hear didgeridoos, and the lead singer is Trinity from The Matrix. Not sure what’s going on, but it’s certainly a vibe.

Where TF is San Marino and why are they so lit? Flo Rida also makes an appearance, which I did not know was allowed. This song is good, but it’s a bit like a watered-down version of some of the higher ones on this list. Also sounds like Pitbull wrote it.

So this was a weird one. It’s eerily similar to YMCA and sung by the Danish Rick Astley. It’s two dudes doing their best and having a fun time, and it’s a good enough disco tune, but it’s like ABBA forgot to include the girls. Could be better.

Ok so “omega” is him saying “oh my god”, I’m pretty sure. Every shot is a reference to some movie or TV show, so it’s probably the most fun to watch. See how many you can catch.

Someone decided to make an entire video of Katy Perry’s Teenage Dream album cover, and this is what we got. It’s kinky, catchy, and features a dance that’s pretty much the horseback-dance from Gangnam Style. Loses points for the poorly-rendered CGI ice-cream dancers.

A bit unfair that Australia is competing from the other side of the fucking planet, but okay. Definitely a flex to be the only country performing to a sold-out stadium and singing “we can do whatever” while literally everyone else is in lockdown. Bonus points for submitting what has to be the most technically-difficult song to sing.

I can’t tell if this is metal or not. They’re definitely dressed as if they were about to be singing screamo, but they’re singing pop music. There’s dogs barking in the background. It’s weird.

The UK was one of few countries to sing in their native language, so hats off to them. This song is carried by its strong brass trio, and sounds like every other heavy-rotation radio hit. It already sounds like you’ve heard it a million times.

22. Bulgaria: Growing Up is Getting Old

Great pun. A very melancholic song that may do very well this year if people are feeling sad and old.

The kid’s still young, which explains the voice cracks. Seems like a great guy but I can’t remember what the song even sounded like. It was aight, I guess.

26. The Netherlands: Birth of a New Age

He’s not singing about broccoli, it just sounds like it because the whole song is centred around an idiom in Surinamese. The Netherlands knew that their lily-white culture wouldn’t turn any heads, so they found the only black person in the country and used his Surinamese roots to set themselves apart. Pretty on-brand for a country that was once the most ruthless and dominant exporter of foreign goods.

If Paramore grew up, had two kids and opened a bookstore, this is what you’d get. Bonus points for the shots of a woman in professional dress running full tilt through the Irish tussock.

The backup dancers here would have made great extras in The Walking Dead. Very flail-y.

It sounds like he’s saying “Ay, man, is this what you wanted?” which I think would have vastly improved the song.

The Portugese John Mayer spends the entire song teasing you with the electric guitar he’s about to pick up, and when he finally does, he barely strums it.

I don’t know what he’s saying but I know it’s about another dude being sad about something. I think it’s about the protagonist dancing with his dead mom.

Someone gets beheaded. I think it’s a marital spat. I’m not sure what’s going on but I am scared. Has anyone checked on Belgium recently? Are they okay?

Most dramatic thing Georgia has produced since Stalin. More men whinging about something while all the women are having fun.

Sounds a bit like a sports channel intro at the start. Sung by a wintery Shakira, barefoot in the snows. Weird horror movie vibes halfway through. Her feet must be very cold.

Sounds like “let’s dance”, which would be less depressing. Video has some serious global warming overtones. There’s a pegasus. Almost a DnB background.

Germany must still be making up for that fiasco in the 40’s, because they try to tackle every single social justice issue in one four minute music video. It doesn’t work. There’s a ukulele and a giant middle finger. “I don’t feel hate / I just feel sorry.” I feel sorry I had to watch this video.

Worse than the other 36 songs on here, including the other one titled “Amen”. If I wanted to watch someone sing Christian rock from what looks like the American Idol stage, I’d watch American Idol.

A man whinging from a modern art gallery. Sounds like a Disney song from an underwhelming sequel.

Tell you who the lucky one isn’t: anyone who had to watch this crap. It’s somewhere between Fifty Shades and Vampire Diaries. It’s Twilight but with too much fake tan. I don’t want to watch a well-to-do white guy in a jersey to tell me about his feelings from the floor of his modernist home.