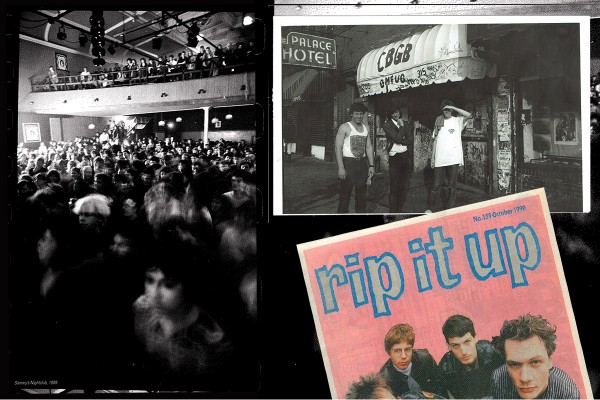 The Dunedin Sound is one of New Zealand’s best known music scenes. The cold, dreary and quirky city that we call home has produced some of New Zealand's most notable songwriters and musicians. Much of their work still influences Dunedin musicians today, and is responsible for our unique gig culture we still partake in.

Lesley Paris played a significant role in the Dunedin Sound. Currently the manager of Otago Access Radio, she was part of the band Look Blue Go Purple and the CEO of Flying Nun Records in the 1990s. Lesley recalls that the scene began in the late 1970s.

“I started to go out and see bands play in ‘79 and ‘80. I was in the same class as Shayne Carter [the lead singer of Straightjacket Fits] and I would go to their practices.” Through this exposure, Lesley began meeting other bands such as The Chills and The Clean. Although still too young to go to gigs, Lesley was enthusiastic about the music from the start. “I had to stand outside The Cook because I was too young to get in [to gigs],” she laughs.

Ian Chapman, who is currently a Music lecturer here at Otago said the same. “1977 and 1978 were crucial years with the band The Enemy. They kind of woke up the Dunedin music scene and inspired a new legion of young musicians in a ‘you too can be in a band’ kind of way. Things didn’t really start to take off until 1980 though,” he says.

Dunedin’s isolation, eclectic people, and inspiration from 1960s music were some of the main contributors to the development of the Dunedin sound.

“It was a merger of the unique people that were involved and their love of ‘60s songwriting like The Beatles and The Kinks and the Velvet Underground,” says Lesley. “It was the love of amazing guitar and songwriting, but the complete ‘fuck you, we can do this on our own and in our own way’ because we were in this little city in the bottom of the world. There was a do it yourself ethic,” she says.

“There was no idea we were a scene, we were a bunch of people, but we didn’t realise it would get labelled anything.”

Ian believes that “isolation and poverty” had a lot to do with the development of the Dunedin Sound. He says that the bands would try to outdo each other, mirroring what was going on internationally. “There are certainly some parallels in terms of motivation and attitude with the earliest days of 70s punk in the UK and US before it got commercialised and became part of the mainstream,” he said. Ian says there were an interesting mixture of people in the bands. “There was certainly an important central contingent of scarfies and school kids or leavers involved,” he says.

Without the likes of social media and music streaming, the Dunedin Sound was entirely based on live performances and selling records. Lesley says that staple venues, such as the place we now know as Starters Bar, were key locations for these concerts. “Starters used to be called The Oriental, it was a really great venue. About 250 people would come and see bands. Empire Tavern [another bar] was down on Princes Street, it was a crazy small venue with magic going on. The Cook was going too,” she said. Alongside this, Dunedin Sound bands would tour around the country during different Orientation Weeks, an easy and effective way to earn money while getting the sound out there.

The gigs were wild, and it’s hard to imagine them happening now. Over the years Dunedin has dropped venues like Harlene cut departments and today’s musicians struggle to book shows for live audiences. Lesley recalls that when she saw The Gordons play in South Dunedin, “it was stunning, it was so loud, so phenomenal, we used to make a lot of our own fun.”

“They would be building human pyramids on stage, people would think ‘what the hell are they doing, stupid kids,’ but we were having fun.”

Lesley thinks there is still plenty of room for creatives in Dunedin, which is important to foster. “Dunedin has always had this space that allows for people to do weirder music and more collaborative things. There has always been a capacity to set up things like that and find the right combinations of people that had time to do those things. There’s lots going on,” she says.

“I feel very lucky to have been here at that time and involved with the people I was involved with. It was part of the isolation and being in a city at the bottom of the world, our influences were the other bands that we saw play, and things we heard from others around the country.”