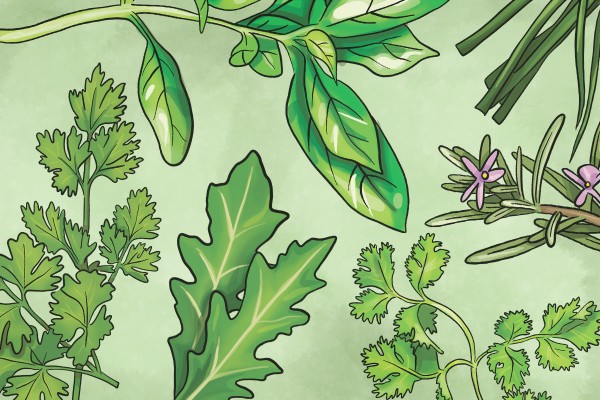 How to Avoid Killing Your Herbs: When, Where, How, and What to Grow

If you expected another article about growing weed, you will be sorely disappointed. This is all about literal herbs.

Herbs don’t benefit from space heaters and alcohol blankets, so planting at the right time is the key to making sure your herbs survive the winter. Right now is about as late as you can possibly plant most herbs in Dunedin.

Despite the cold, most herbs aside from basil will do best outside rather than inside. Whether you’re planting inside or outside though, the most important thing is that your herbs get a variety of sunshine and shade, and that there is enough airflow to prevent their roots from rotting.

The more space your herbs have, the better. Buying a big planter from the Warehouse or Mitre 10 is worth the money. Another option is making your own planter box, like out of old pallets if you’re willing to watch some DIY videos on YouTube. Using plant pots will also work, but don’t keep them in the little tubs they come in because they won’t have good filtration and they’ll just die.

Planting your herbs right will set them up for the rest of their lives. First you have to choose whether you’re buying seeds or seedlings. There’s no wrong choice here, but some herbs (like coriander) grow more easily from seed while others (like rosemary) will be easier from a seedling. I won’t run through every herb here, but just have a Google. You’re also going to need to buy soil, and probably more than you think. I thought the 10kg bag I got from Mitre 10 was overkill, but it was only just enough.

If you are serious about keeping your little friends alive, you should also get some kind of food for them to nom on. I use an organic seaweed plant tonic which is a little stinky when you open the bottle, but it keeps them thriving. Compost can also be a good alternative once the herbs are already established.

Much like a breatha after a day, your herbs are going to want to drink. Not to invoke the hippie within, but the key is to listen to them. You can usually water them daily, unless it's wet, and/or cold. If the soil is real damp, you probably don’t need to. If the bases of your herbs go brown or black, it means the soil is too damp. Water them less and make sure there’s enough air flowing through (this is a really common problem with basil). Water the soil not the plants. Watering the leaves, stems, or roots directly can lead to root rot so try to just water the soil all around the plant and let it suck up that water itself.

You probably bought herbs to to eat them, so you should probably also know how to harvest them. Use scissors to cut them right where the leaf meets the stem, because ripping them will ruin the plant. Every now and then, give the plants a light pruning by cutting off the top few centimeters. This will let the plant will continue to grow and allow more leaves to flourish. If a stem or area of a plant has gone to seed, shrivelled up, or died then cut that shit off so the bad vibes don’t spread to the rest of your garden.

Think about what you want to grow. If it’s a tropical or subtropical plant, it just simply isn’t going to vibe with winter in one of the closest cities to Antarctica. Basil is native to Central Africa and South Asia, so it has a harder time surviving here than chives and tarragon, which are native to temperate regions of Eurasia and North America. Woody herbs like rosemary, which is native to the Mediterranean, are generally hardy enough to withstand cooler climates. Mints are naturally found pretty much all over the world, and there’s even a species native to Aotearoa (hīoi).

Another consideration is the longevity of the herb. Some plants, like rosemary, take ages to grow so you won’t get much herbs initially, but once it’s a full bush you’ll basically have an endless supply. Other plants, like rocket and coriander, grow very fast and you can get edible herbs within weeks. But without care (and a bit of luck) they’ll eventually go to seed.