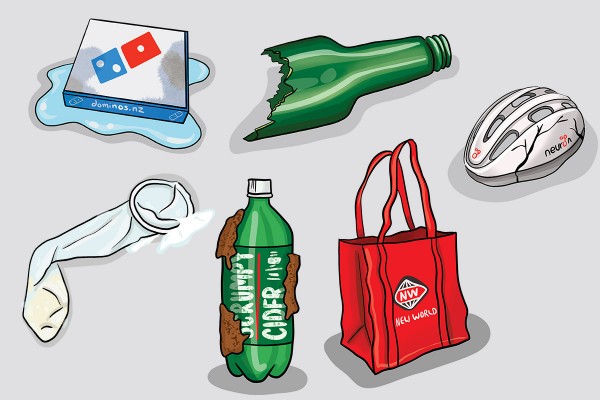 What Dunedin Street Litter Are You?

A single sock. Ciggie butts. The natural landscape of Dunedin is rich with treasures.

They say “you are what you eat,” but also “you are what you throw away.” Bins overflowing with torn black rubbish bags. Noodles, spilled like entrails from a corpse. Bits of rubber and glass and plastic fibrous mesh strewn across the ground form the background to our Dunedin mosaic.

Each piece of rubbish has a story to tell. A box left empty, dropped by the boys who bought it. A wing mirror, separated from its soulmate. A broke-back textbook, never read past the first chapter. In a neighbourhood populated by rats and humans who get called rats, trash is as natural, and more common, grass. Look into the soul mirror of the rubbish, dear reader, and tell us what your reflection resembles.

-Had asthma as a kid

-Spends their student allowance on drugs

-Still can’t sort their rubbish from recycling after three years

-Rats that can swim

-Falls apart at the slightest criticism

-Hasn’t spoken with parents in months

-Lives in their room

-Rolls better cigs than anyone you know

-Cleans bong for special occasions only

-Has a famous friend and tells everyone about it

-Never, ever puts their bins out

-Haircuts as a coping mechanism

-Vegan but will eat Maccas because it’s “not real meat”

Discarded Lining of a Neuron Helmet

-Never lived up to their “potential”

-Has 30 Spotify playlists but only ever listens to four

-Enrolled in a Master’s, probably shouldn’t have

-Doing better than they look

-“We’ve gotta get coffee sometime, I mean it”

-Doesn’t have a headboard

-Something needs to be shaved

-Will make someone really happy someday

-Has an awesome family but somehow ended up a dropkick

-Reminds you of your insecurities