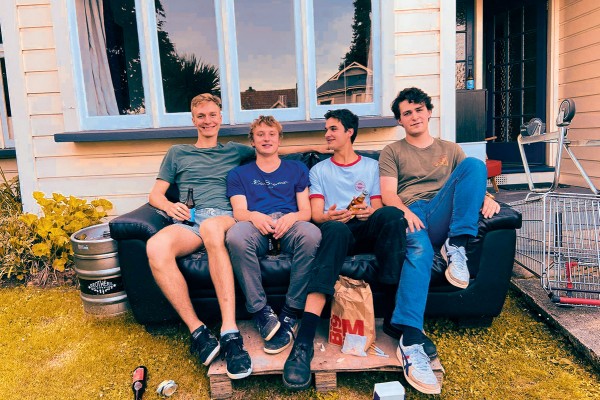 The Slinks: Kings of Flat Parties

The Slinks are an up and coming band on the Dunedin scene. Starting out in 2019, they’ve worked their way up from playing at the humble Crown Hotel to playing gigs as far out of town as Queenstown. They have two EPs out on Spotify: The Slinks and Come On Now. We checked in with them to see what it’s like playing gigs in Dunedin’s flat scene.

So, how did you guys form?

Ben: Me and Jack were already doing stuff and we just formed out of that.

Eli: I was in the line at the Baaa and I just hear Ben yell out from like ten metres down the line “Eli! Join my band.” And I was like “Fuck, I guess I will.”

Jack: And we already knew that George was Master Shredder so we got him in.

Playing around flats, is it challenging with noise control?

George: Well it depends where you’re playing, some places will let you get away with it. But a few nights ago we were playing next to two motels, which was a bit difficult.

Ben: It can be tough as well because everyone wants you to keep playing and we want to carry on playing, but if noise control comes they can take our equipment, which we need for other gigs.

Eli: It’s kind of nice because the neighbours of a flat asked us to play on St Paddy’s because they heard us on a previous night. So I guess it was worth it.

How fucked up do you get before a gig and have you pushed it a bit far at times?

Jack, Ben, George, all at once: Eli has.

Eli: Nah, c’mon, that was just a casual gig. But I did play so shit that night.

Jack: It’s important to be on the same buzz as the crowd, if they’re drinking you should drink a bit.

Ben: It’s annoying when you’ve been playing for an hour or two and haven’t been drinking heavily but everyone is fuckin wasted and you’re trying to pack up your shit.

Yeah on that, how is it trying to protect your shit at a gig?

George: Things naturally just get messed up. One time, when we finished playing at Ben’s flat, my pedal board was swimming in beer just from guys standing in front of me being pushed and spilling their drinks. Everything becomes sticky and reeks of beer.

Jack: It’s not like they mean bad, they’re just drunk. That gig too, they were so drunk they called four encores.

What’s your drive? Why are you playing?

Jack: For me, definitely fun. Any opportunity to play the drums is mean. The hanging out aspect is huge.

Ben: Yeah I really enjoy the entertaining bit and the performance of it. And writing, I like writing songs and lyrics and having people listen.

Eli: I just love the attention. For ages, I was just playing bass and doing songs I really liked and I was like fuck imagine if people could just watch me play. It's a pure ego thing.

George: I was doing academic music through the Uni but this band is more fun. Studying music is interesting for you, but it's not that interesting for anyone else looking in.

Eli: I think this band has very nicely developed into somewhat of a family.

Jack: The social aspect is the main part, if you can’t hang or chill with someone in a band then the band is fucked.

George: We’re saving the clash of egos for a few years later.