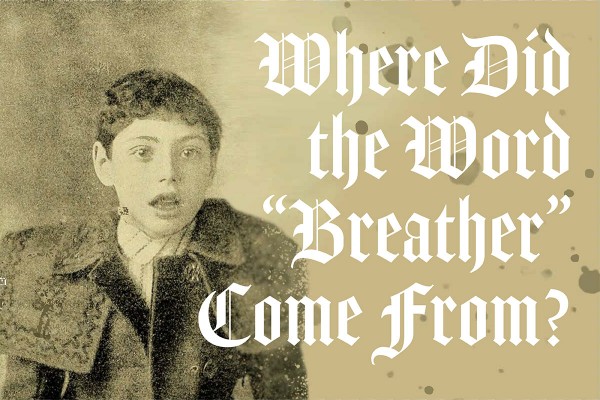 Where Did the Word “Breather” Come From?

For years, Otago students were dubbed ‘scarfies’. The word was popularised by the eponymous 1999 film and came loaded with half-a-century of resentment from older generations. As ubiquitous as the ‘scarfie’ moniker once was, it has increasingly been replaced by a newer, more confusing title, that of ‘breather’ (informal: ‘breatha’). Where did all the breathers come from, and why did they destroy the scarfie?

The first mention of ‘breather’, in its New Zealand context, popped up in 2012. “brother or bro when reffering [sic] to a friend. Mostly used in new zealand by boys. In replacement of BRO,” wrote an Urban Dictionary user called ‘mother of god ;)’. The example they gave was “churr breather ;)”.

Aside from the misleading use of winky faces and 2012 slang (‘churr’), this sheds light on the meaning of ‘breather’. While the Dunedin usage of the word has deviated from its relationship to ‘brother’ or ‘bro,’ the link might explain why ‘breather’ was adopted so quickly despite the fact that it is not a word in frequent usage. It’s just ‘brother’ with different vowel sounds. It also explains the informal ‘breatha’ as the logical progression of the Otago student dialect.

When hyde-being-hyde regularly results in a police presence, and the police’s duties on their local beat includes whipping out their police-phone to film a sub-1:30 yardie, it's safe to say that ‘taking a moment to rest’ isn’t something that Otago students are renowned for. So by a simple process of elimination, we can establish that ‘breather’ comes from the way we, well, breathe.

The notion of being being a ‘breather’ is also linked to being a waste of space, according to some of the more misanthropic definitions on Urban Dictionary. “They take up too much oxygen breathing my air,” wrote user Kathylu in 2010. This may seem harsh, but in context of the other decidedly scatological definitions on the same page, it’s actually kind of charitable.

This takes us to the very ‘80s-nerd-film insult, ‘mouth-breather.’ The term evolved from a technical term used by doctors to a slang term meaning ‘idiot’ by 1915, according to lexicographer Jonathon Green. Ever since, ‘mouth-breather’ has meant a stupid person in slang in numerous English-speaking countries. It’s not too much of a stretch to imagine that we would get too lazy or too intoxicated over the decades and simply not bother with the mouth in ‘mouth-breather,’ eventually using ‘breather’ to lovingly insult our collective subculture.

The specific Otago usage seems to be a merger of ‘mouth-breather’ and ‘brother,’ creating a person who is your bro but also a waste of space. That brings us to Urban Dictionary’s most popular definition of ‘breather’: “Almost the entire opposite to a fuckboy. This specimen lives entirely for the boys, and devotes their life to putting smiles on their friends' faces, through particular acts such as shoey’s, rhinos, and getting naked,” wrote Breathersaurus in 2018. This is the breather we all know and love.

Critic’s first use of ‘breather’ in the context of dart-huffing, booze-inhaling, and BYO-vomming comes in 2016. This debut, alongside Google Trends data, cements 2016 as year zero for Otago’s usage of ‘breather’ in a general context.

‘Breather’ has almost entirely supplanted ‘scarfie,’ when referring to the Otago student population. ‘Scarfie’ is pretty easy to trace back as extensive research has already been conducted upon it. It came about because boomers, before they fucked the property market and when they were still at uni, would wear scarves around their necks to survive the bitter winters of Dunedin. In a 2006 NZ Herald interview with the curator of the Otago Museum exhibition Scarfies: Otago Student Culture, Ian Wards said that “the term ‘scarfie’ seemed to have been around for only 20 to 30 years,” having evolved from how popular scarves were with students.

The demise of the word ‘scarfie’ may have been the result of increases in the price of wool, when supply dropped in 2015. This increased price started around 2015 and really got going  around 2016, the inaugural year of the breather. The rise of the breather may be directly linked to New Zealand’s wool supply, or climate change, it’s hard to tell. These days, no one under the age of 27 describes themselves as a scarfie.

Although ‘scarfie’ is a more inclusive term as people from any gender can be a scarfie, a lot of students reckon the term ‘breather’ describes a new kind of old boys club. But this is 2021. It’s been a full five years since the emergence of the breather, so goddamn, just make it gender neutral already.

Maybe when you send your kids off to Otago Uni in a few decades time, you’ll say: “You’re off to be a breather, don't fall into the K-hole, stay warm, love ya.”