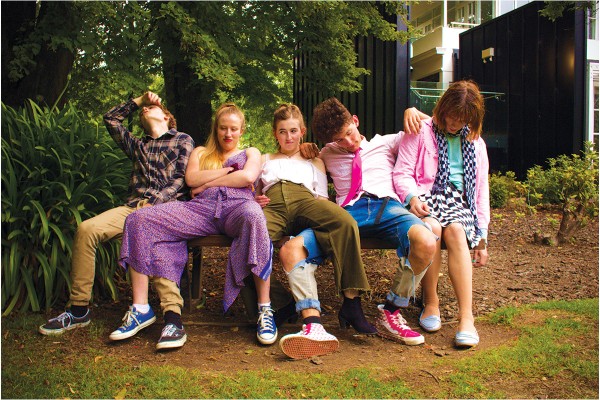 As the saying goes, you win some, you lose some. This mantra rings especially true for one of Dunedin’s newest up and coming acts, Sometime Winner.

The five-piece line up consists of lead singer Louis (who dubs himself Kid Freeman on the Mic), guitarist Silas, violinist Rose, bassist Alice, and drummer Smith. They are just as high-energy and fun as their sound. Critic sat down to chat with the group about their upcoming EP, gigs, and what it means to be a sometime winner.

Sometime Winner started out in high school, at Logan Park. It wasn’t until lead singer Louis returned from overseas last year that the band fully began to kick into gear with aims to “take over the world”. Their high hopes for world domination came crashing down with Covid-19, resulting in cancelled gigs and missed opportunities.

Despite this, Silas described lockdown as a “blessing in disguise,” which allowed them to write and produce more music from the comfort of their own homes. Louis said the lockdown tunes have since become “party hits” that the band was able to play and release once level two came into effect.

“We listen to lots of rocky stuff, like The Beths or The Clean. But when I was 12 I really liked Neon Trees,” Louis said. “We can all listen to different stuff and it all comes together.”

Sometime Winner make the type of music that you can drink and dance to with friends, or drink and cry to by yourself. The group write their own tracks, but they leave it up to the audience to create their own interpretation. “I could talk for ages about what each of the songs mean, but it’s nice to leave it to the listener,” says Louis. “They’re fun to play, the songs become bigger than themselves. They hold their own story.”

Sometime Winner’s flexible sound has enabled them to play a variety of shows around the Dunedin scene.  “We play lots of gigs at the Dog with Two Tails, or Inchbar. The classic Dunedin parties and bars,'' said Rose.

Sometime Winner want to make music that is accessible to everyone, no matter which area of the Dunedin scene you’re in. “It’s a moral duty to make the songs accessible to people,” says Louis. “There are a few different ways you can fit into the music scene here, there are bands that go hard on the alty scene, or the student scene, or some do both. But we just make straight good tunes, and it's working out. We do wacky stuff, but it is still pretty accessible. It’s a good line to straddle and I think we straddle it pretty well.”

As for the band's upcoming goals and events, they are dropping an EP which was recorded over the summer, and are aiming to expand their audience to outside of Dunedin. “It would be good to spread the word far and wide,” says Louis.

“You can’t make it happen, it just happens. If you put yourself out there, great things will come your way.”