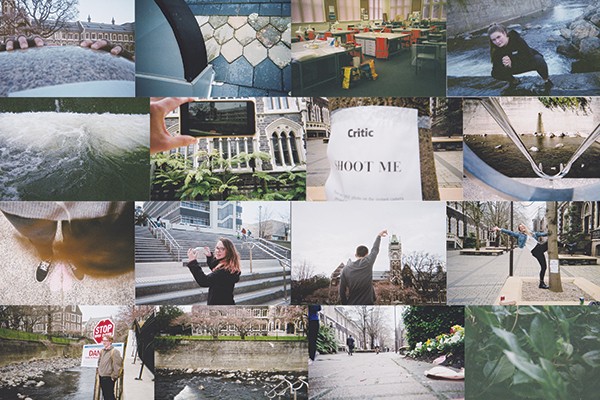 Give Lync Aronson a medium to advertise his cause and he will. A library bookcase, an unfortunately timed fire drill, an instant camera sitting on the bank of the Leith; he’ll sniff out advertising opportunities before you’ve even noticed that free food Friday poster taped to a tree. The title of this project was the first thought that came to mind when I saw that slick quiff gracing the negatives. I had to check myself though, for as much as the arrogance is distasteful, the photograph was one of the best to develop from the first batch. Choosing to turn the camera portrait was a rare occurrence, and the dimly lit foreground fading to a crisp blue sky and glowing clock tower gave the air of a photograph taken out of time.

Art is to be owned and created by anyone. The common theme within the majority of exposures was a to the environment; many of you decided to use your single shot to document an intricate detail of the surrounding landscape. These often mapped out a journey through campus; a flash of pink magnolias followed a back entry alleyway, the brown rapids of the Leith ran towards fern coated Oamaru stone. On the other hand, many of you focused the narrative on someone around you. It could’ve just been the grungy filters a piece of near-redundant camera equipment imposed on the resulting film, but the pictures of friends were often reminiscent of an intimate moment caught spontaneously. It was heartwarming to be your audience.

There were plenty of people shots (vape naysh thrown up from leith to quad), but a surprising lack of selfies. I thought this would’ve been a prime opportunity for a snap of your mug to be immortalised in Critic forever, but only a few emerged out the other end. To me this highlighted the selfish nature of the digital media we indulge in daily; the ability to take and store an infinite number of photographs for our own visual pleasure precludes our ability to prioritise scenes which we find beautiful or intriguing. When given one chance – and thank you for respecting that rule – the singular outcome held significance far beyond twenty or thirty photos of the same subject.

Pooling together the perspective of forty different artistic viewpoints conjured a snapshot of university life that doesn’t receive enough attention. Not once did an RTD bottle fly through the background of a scenic river shot. Never did a burning couch detract from the cherry blossoms blooming in the university lawns.

So thank you to the students who braved the Geology basement, those who stood in the Leith to get the perfect shot or turned the project meta by taking photos of my poorly crafted sign.

To everyone who contributed, thank you. Fuck yeah.