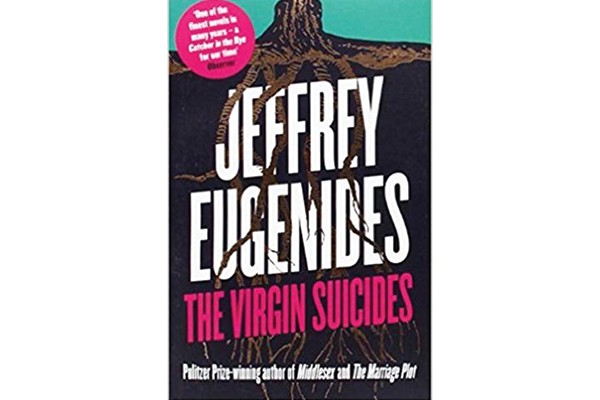 The Virgin Suicides, written in 1993, is, I suppose, a haunting depiction of the ‘enigma’ that is girl-hood.

Set in small town Michigan in the 1970s, the novel is narrated by an anonymous group of boys who obsess over the Lisbon sisters. There are five sisters: 13-year-old Cecilia, 14-year-old Lux, 15-year-old Bonnie, 16-year-old Mary and 17-year-old Therese. Presented initially as pretty, average girls from a normal suburban home, the twist comes when the youngest, Cecilia, attempts suicide by slitting her wrists in the bathtub. After the attempt the Doctor tells her she’s not old enough to know how bad life gets. “Obviously, Doctor,” she said, “you’ve never been a thirteen-year-old girl.”

Against a backdrop of concern and judgment from the community, we delve into the perspective of the boys as they more or less stalk the Lisbon girls. As they meticulously ‘collect’ the sisters’ diaries, notes, photographs and knick-knacks, the boys’ accounts grow larger than life. As the novel progresses the focus is mainly on Lux, the most glamorous and rebellious of the girls. We watch her win the crown as prom queen, we spy on her through binoculars as she has sex on her roof in the middle of the night, and we get the slightest hint of her inner self through empty, thousand yard stares.

Not far from identical to the film, The Virgin Suicides is a good enough example of captivating storytelling.

It is a mystery, a detailed account filled with nostalgia and romance. It is a disturbing example of how far-fetched the male gaze can be. For example, when describing Lux’s “animal leashed below her waist”, one can’t help but cringe.

I get it. It’s not a book about the Lisbon girls, but about the boys themselves, and the death of their innocence. It is a story about how the suicides affected their transition into manhood. That’s fine and dandy. But this perspective becomes exhausting.

I will admit the writing is poetic, the story flows and it’s a tidy little tale, fairly honest and blunt at times. Eugenides captures the melancholy of adolescence pretty bang on.

But, in the end, the pagan dream girl image irritated me. The Virgin Suicides is every tumblr page I followed in high school, and this may have tainted my interpretation. But it does make a beautiful point of taking adolescents and their feelings and behaviours seriously.

So I’m torn. On one hand, the book is good, it embodies that which it criticises, and definitely makes one consider the way people and the media react to suicide. On the other hand, every description of a female being irked me like the sound of a knife scraping against a china plate.