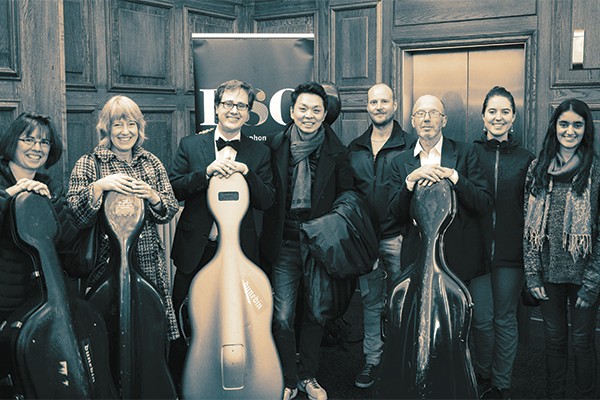 Following the last DSO concert, which proved to be a very pleasant evening with my dad (even if he was stingy on the ice cream front), I managed to find a friend to accompany me to the most recent event. I am 85 percent sure she forgot she was supposed to be coming, as when I arrived at her flat to pick her up before the concert, she was in her slippers and had not yet had dinner. After frantically finding her sneakers and cooking some toast, she proceeded to drop crumbs through my car. But it’s ok. A friend is a friend, and I was happy for her company, if not her crumbs.

The concert started with John Adams’s The Chairman Dances (Foxtrot for Orchestra). He may be turning 70 this year, but I have a small (major) crush on John Adams. His work is next level amazing, he makes interesting and articulate political comments, and I low-key enjoy confusing my peers by talking about him and playing his music and watching them slowly realise that I’m not in fact referring to the second President of the USA. The work has a strong pulse and complicated rhythms. The prominence of the piano is clear, which John van Buskirk played very convincingly. The orchestra eloquently presented the sequence of dances, handling the complicated cross-rhythms and runs with ease.

Li-Wei Qin then came to the stage for Dvorak’s Cello Concerto in B minor. Everyone loves a bit of Dvorak, and everyone loved Li-Wei Qin. He played with great virtuosity and emotion. Conducted by Simon Over, and led by Concertmaster Tessa Petersen, the orchestra supported Qin superbly. As an encore, Qin performed Chonguri, by Sulkhan Tsintsadze, which involved plucking and strumming the instrument, and was mind-blowing.

After intermission, the orchestra performed Brahms’s Symphony No. 4 in E minor. The DSO handled Symphony No. 4 extremely well. The first two movements were particularly lovely, although, personally, the Allegro energico e passionato seemed a little bit fast and not as tight as the other movements. However, the passion all the performers put into the work, as well as the challenging moments throughout the piece, which showcased the talents of various sections, left the audience in awe of the high-quality orchestra that Dunedin is very lucky to have.

The quality of the music I listened to for the rest of the night quickly deteriorated at the Law Ball, and I was left with ringing ears and a headache. This served as further evidence that a DSO concert is the best way to spend a Saturday evening.