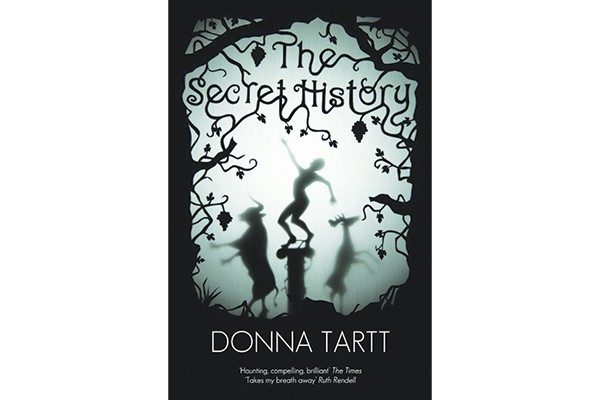 The Secret History is difficult to place into a temporal setting. Initially, based on the characters’ diction and the elaborate descriptive passages, I thought it was set in the ‘50s. The excessive use of home phones, the ones wired to the wall, made me think it was the ‘70s. Eating at a club, maître d’s, chintz chez lounges and paying by cheque made me think it was the ‘80s (chintz was huge in the ‘80s). The use of credit cards and coke at crazy frat parties plus vague mentions of people randomly sleeping with other people helped me narrow it down to the ‘90s, which was when Tartt first published this masterpiece. The elusiveness of a temporal setting makes the misted lawns and tautological Latin lessons seem as if they slipped right out of a prospectus for the Oxbridge Universities.

The biggest head f*** of The Secret History is how f***ed in the head its main characters are. What starts off as a nerd desperately trying to get his ‘ins’ with a crowd of richer, and hence slightly cooler, nerds, changes deep guttural Ford Thunderbird gear into a jovial Midsomer Murder-esque mystery, before clattering like your mother’s best china into a psychological thriller - eventually coming up for air as an “I Came of Age Once, and I Think I Died” poem, the kind you are going to write during some heinous quarter-life crisis.

What is most invigorating about The Secret History, its utterly hopeless and circumstantially blind protagonist-come-narrator. The pages slosh with cynicism as the narrator reminds you about clues to this ‘why-done-it’ mystery that he knows you’ve seen and won’t remember. His apathetic resignation to how goddam keen he was on this weird sadistic group of people. His inability to ever step away and do the right thing.

The best thing about this novel is that you find out who dies on the first page.