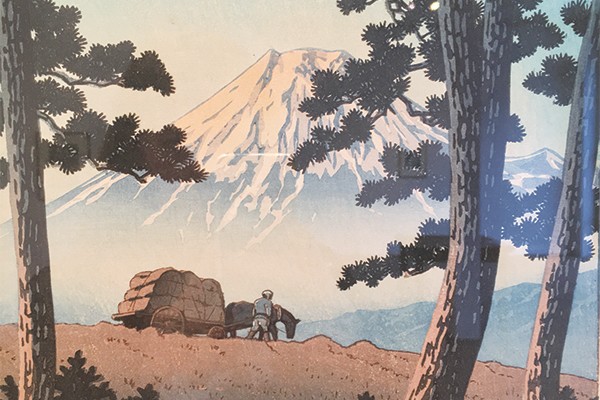 Early 20th century Japan is a total cultural divergence from a tiny South Island town like ours, but the McDowell gallery has been authentically transformed into a perfect haven for the impressionistic prints of a pre-war age gone by.

Shin-hanga (literally meaning “new woodcut prints”) is an art movement gleaned from a pre-war Western demand for romanticised and nostalgic views of the East.

The shin-hanga movement flourished from 1915 to 1942. Inspired by the European Impressionists of the time, the Western influence becomes most apparent in the perceptively variable expressions of individual moods and effects of light. An interesting aspect to shin-hanga was the traditional ‘ukiyo-e’ collaborative system where the artist, carver, printer and publisher engaged in an equal division of labour, as opposed to the conflicting sōsaku-hanga ideology which emphasised self as the sole creator of art.

Artworks in the shin-hanga style focus on strictly traditional themes, such as beautiful women, birds-and-flowers, famous places, and landscapes (which comprise over seventy percent of the works). An essential feature of many of the landscape works is the depiction of intimate environments, often tranquil and obscure.

There was never much of a domestic market for shin-hanga prints in Japan. They were considered to be mass commercial products, a simple reaction to supply and demand, as opposed to the European perspective that shin-hanga was fine art. Shin-hanga declined massively in popularity as the Japanese military enforced sanctions on art and culture during wartime. Never regaining momentum, a variation, sōsaku-hanga, emerged as the genuine heir to the woodblock tradition and enjoyed immense popularity and prestige.

The McDowell gallery has always been fascinating to me. Upon entry it appears to be a rather standard ground floor room, a few pieces hung on the walls, nothing too dramatic. The intrigue always comes when I spy the owner himself, an eclectic looking man peering out from his office, a small crevice in the otherwise light and airy exhibition space. His office is piled high with ostentatious framework and remnants of showcases gone by; a cluttered area filled with artistic fragments of thought, framed in his shin-hangaesque microcosm. Head to Dowling Street to catch this sliver of history before Dunedin follows suit and phases out of the Shōwa era.