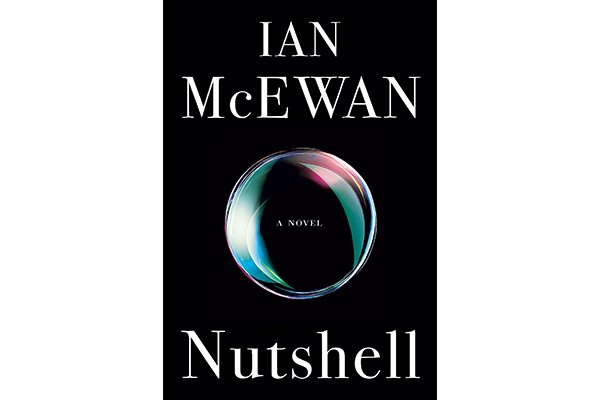 Ian McEwan claimed fame from the world of non-literary oriented folks when Kiera Knightly had sex in a library, a scene that won the novel, and movie, Atonement, a permanent place in the collective memory of popular culture.

I confess, I’ve tried to read Atonement several times, and I never got any further than the first chapter. I’m blaming the type font. Nutshell, on the other hand, is new, it’s finished and its type font and margin spacing are much improved. I read the whole thing without my glasses, a moment of de-nerded luxury for a dweeb like myself.

This novel skips and skims several genres, tropes and narrative types. Arguably the most enjoyable aspect of Nutshell is the first-person narrative written from the point of view of an en-wombed foetus. From an unborn child’s perspective, McEwan explores an unhealthy fascination with wine; shout out to the NZ Marlborough red he has his female pseudo-protagonist down. Each chapter is centred around this beguiling lump of developing human flesh, who savours bottle after literal bottle of wine, as his mother gets drunk with her wet blanket boyf (the brother plotting to murder her husband).

*Just a health warning to pregnant readers, do not drink ANY alcohol if you are pregnant. You will fuck up your baby’s brain, and its precious little face, and most certainly its life *

Anyway, it took me about four chapters to get over my disgust at this pregnant woman’s alcoholism and her unborn child’s unrealistically intellectual inner dialogue. I mean, a foetus doesn’t know what a hand is, let alone the words to name it. Add foetal alcohol syndrome into the mix. Well McEwan, the factual realism of your story gets a no from me.

Regardless, this unconventional narrator almost provides you with a co-conspirator, both scoffing at the wet drip of a boyfriend and how mucked up she is. She hates her boyfriend. Hates herself. Loves her husband. The foetus “knows” all of this, how his mother feels, what she thinks. What really gets me is McEwan’s murderous couple, supposedly “trying to do what’s best”, never once considering the future of the unborn child.

So perhaps this novel is a lesson in manipulation. Mum begins to think that her boyf made her get drunk, so they could plot the murder of her husband. Take his land. Take his money.

McEwan’s narrative is sardonic, his characters are of few words and many disclosed intentions. While the overture is glib, funny and almost as unpleasant as a walk in a paddock of daffodils at the break of spring, the melody denotes a bouquet of floored, messy and irretrievable lives. Maybe Nutshell is a lesson in neglect.

In conclusion, I’ve liked this book more than the few I’ve previously read this year. It pairs well with the smell of wood-fire smoke caught in your hair, cheap cheese + crackers and foot rubs.