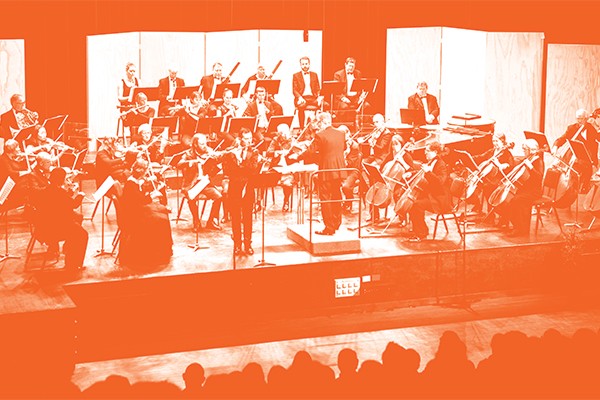 Sadly, it’s always a struggle to find somebody to claim the second ticket of my double DSO pass. My friend pool of Western Art Music fans (the “WAM-fam”) is on the light side, and is significantly diminished once you remove those who are members of the orchestra, so have no need for a ticket in the audience. After messaging five different people (including a fellow classmate who I’ve shared approximately 25 words with over two years), all of whom had other commitments (mostly Netflix related), I felt defeated. Dad laughed and made some comment about me not being able to get a date. So that made me think, why not take a stroll down memory lane, back to the days of father daughter movie dates? Except, this time, to the orchestra. While my father’s musical taste is diverse (he’s played in both Rock and Brass bands), he certainly isn’t an orchestral music fan. Of the few concerts I’ve taken him to, the recurring comment is always, “Orchestras are nowhere near as professional as brass bands, real musicians don’t need to tune on stage,” so I wasn’t sure how the outing would go.

The first comment he made, at the conclusion of the first work, Stravinski’s Pulcinella Suite, was “that was a pretty cool piece”. High praise. The Neo-Classical work is full of rhythmic vigour and harmonic twists. Richard Davis, the conductor, explained the piece well: “The work reflects a Baroque style, but every now and then you hear ‘wrong but right’ notes,” showing a modern, twentieth century influence. The orchestra captured the complexities of this style magnificently. This piece was followed by Puccini’s The Chrysanthemums. Dad started to doze off but insists it was because the piece was so beautiful. Indeed, the orchestra effectively portrayed the dark emotions of the piece, displaying elements of both mournfulness and beauty.

Luca Manghi then came to the stage to perform Vivaldi’s Flute Concerto, ‘La Notte’. Dad’s first comment was that Manghi looks like the villain in the James Bond film we’d been watching that afternoon, which was intended as a compliment. Alongside this revelation, we were also both in awe of Manghi’s breath control. This was the first time Dad has ever come close to admitting that orchestral musicians are as good as brass players. Manghi soared through extremely long, virtuosic lines, constantly maintaining the exuberant nature of the work. I’d been hoping that Dad would be feeling nostalgic and buy us ice creams at intermission, but he didn’t offer, and I was trying to look like a professional critic, so I didn’t ask. Nevertheless, it was disappointing.

Manghi returned to the stage for the world premiere performance of Briccialdi’s Flute Concerto. Orchestrated for Manghi by Michael Vinten, the work is full of exciting virtuosic passages, which Manghi executed brilliantly, supported by the highly polished orchestra. At the conclusion of the piece, Manghi quickly dropped his flowers off and hurried back on stage to take his seat as Principal Flute. Dad said “woah,” so was clearly impressed. The concert finished with Mendelssohn’s ‘Italian’ Symphony, Symphony No. 4. Written after a trip to Italy in 1830, the work conveys the Italian countryside, art, architecture and culture. The orchestra accurately portrayed these features, and were particularly impressive in the fourth movement, which captures the nature of the fast paced Italian speaking style.

The car conversation on the way home largely revolved around whether we should go get a couple of slices of discounted cake from New World, but Dad did display hints that he enjoyed the concert. “The flute can actually sound quite nice”, “Some of those pieces were impressively long” and “Why don’t more students go to the concerts?” were all signs that he thought it was a worthwhile way to spend a Saturday evening. The last question made me wonder. I have countdowns on my calendar to DSO concerts. I have missed friend’s birthdays to go (I’m counting on them not reading this review). DSO concerts are my number one favourite way to spend a Saturday evening. So why don’t more students go? Probably because they had similar hesitations that Dad did.

But, I challenge you to give it a shot. You might find that Western Art Music is actually really cool. A James Bond character might be soloing. Visit dso.org.nz to find out more about upcoming concerts.