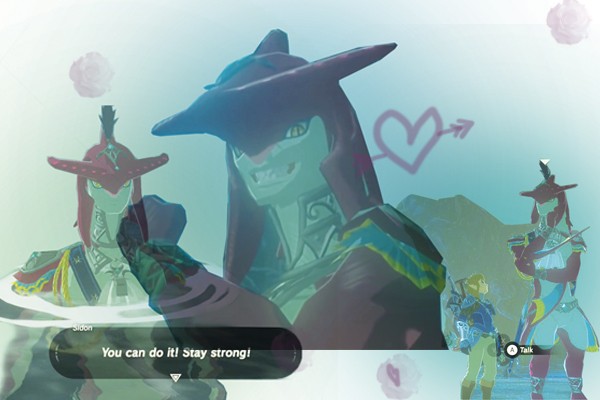 The Legend of Zelda: Breath of the Wild

Do we really need another Breath of the Wild review circulating out there? Probably not. But I think I had a different experience to everyone else who has played this game, because I hated it when I first started it.

The Legend of Zelda is a franchise I will love unconditionally forever. Ocarina of Time was the first game I played to completion and also the first thing I ever wrote fan fiction about (totally G rated). I’ve played every game in the series, except for the CDI adventure games, and have possibly spent more money in my lifetime on Zelda merchandise than on food. With that being said, I am totally unbiased when it comes to critically reviewing each instalment that Nintendo releases.

I bought Breath of the Wild as a “well done” gift for myself after speaking at the Game Developer’s Conference in San Francisco in March this year, because my life is very hard. I was so excited to chill out with no worries and get totally lost in the world of Hyrule again. The hype surrounding the release of Breath of the Wild had bubbled up to a “10/10, perfect game, best Zelda ever,” consensus by what seemed like the entire online gaming community. When I played through the first few hours of Zelda, I was so upset because I hated all of it.

I was so confused as to why I wasn’t enjoying it; I blamed myself. I kept thinking ‘oh it’s because I’m tired and just got back from traveling’ or ‘it’s just because you’re not concentrating enough, you really need to get lost in the game to get to that flow state of enjoyment’. After going through a bit of the main storyline quests, I gave up in frustration and didn’t revisit the game until months later.

I was obsessed with why I hated it. My friends were loving it, why couldn’t I? Have I been playing too many dating simulators? Too many short indie games about having sex with people you meet on the internet? Has my video game taste become trash? (Probably yes.) I hated the shrine puzzles I was presented with, I hated the empty world that was only filled with enemies and apples, I hated the inability to interact with any wildlife, except for killing it. Reading reviews was infuriating for me because I felt like I was just being a whiney baby (maybe I am?) and not just playing the game for what it was and enjoying it. Then I remembered the Tend and Befriend reaction that people can have when faced with stress, a common reaction when playing games. Brie Code wrote an excellent article about this feeling called “Video Games are Boring” and I would strongly urge you to read it.

The turning point was when I met the Zora Prince, Sidon. His uplifting and encouraging dialogue as I made my way to Zora’s Domain felt like a metaphor for my own experience. Just keep going and it will get better! And it did. I think this is largely due to the wide variety of NPCs you meet during your travels through Hyrule. Characters in the Zelda series have always been a joy to interact with and Breath of the Wild does not disappoint. Every side quest has you interact with unique and memorable characters. Each location feels like its own world and has depth; with little baby Rito running around, Gerudo women of different shapes and ethnicities and elderly Zora and Gorons.

While I have my own hang ups with Breath of the Wild, it is the most enjoyable Zelda experience I have had since A Link Between Worlds. I loved A Link Between Worlds for the puzzles, dungeons and wall-fusing mechanic. Breath of the Wild’s strengths are different: the hidden away locations, the lovable and unforgettable characters, deflecting lasers from Guardians and totally owning them. My relationship with game reviews has changed a lot because of this play through experience. I used to run to publications for guidance and affirmation, to know that what I was spending money on would be worth it. This is totally ridiculous because, even if a game seems to be irrevocably deemed as ‘the best game ever’, gaming experiences are different for everyone and it’s okay to find flaws and have your own opinions. I can’t give Breath of the Wild a rating, mostly because it’s too fucking huge to cover every aspect of it, but also because your experience may be completely different to mine, and that’s ok!