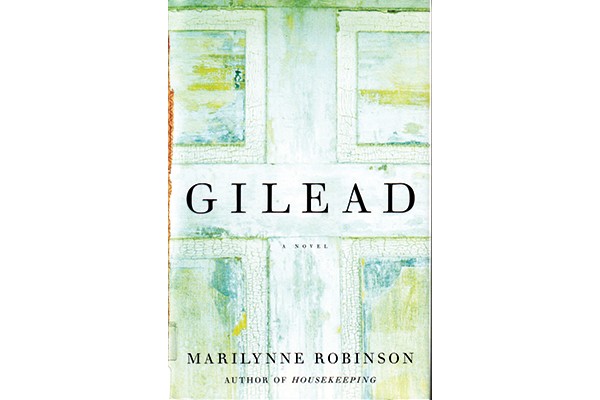 It took longer than I’d expected for me to get into this book.

Marilynne Robinson has proven herself a talented, tender and transportive writer in her other novels, and over the years she has received a veritable feast of awards.

Published in 2004, Gilead was the winner of the 2005 Pulitzer Prize for fiction, as well as the National Book Critics Circle Award. It is written in the style of a very long letter. The year is 1956 and Reverend John Ames is approaching the end of his life. Living in the remote and peaceful town of Gilead, Iowa, Ames has a wife and a seven-year-old son, whom he believes, sadly, won’t remember much of him when he dies. He sits down to write this letter to his son, a thorough account of his life. The narrative is slow to start with, and I found myself having to desperately concentrate to persevere. Going into Gilead is a challenge; you don’t have any emotional ties to John Ames until the end. While it begins on a heavy note with musings of an old man’s inevitable death, what kept me invested was the appearance of his wife, the star of Robinson’s other novel, Lila. The two stories are linked, and I recommend reading Lila before Gilead because you will gauge a good sense of Robinson’s style, and become more emotionally invested. I won’t focus on it though, that’s for another review.

Gilead has been described as a masterpiece. It wasn’t until over half way through that I realised this was true. I’m starting to get tired of myself; I praise her writing a bit too much, but for good reason!

From memories of his father, a Christian pacifist, to his Grandfather, a radical abolitionist who “preached his people into the war”, Ames relates the lessons he’s learned from the people and poverty in his life. It becomes hard not to be affected by the questions he poses and the sorrow that stains the novel.

John Ames describes his job as "giving you a good basic sense of what is being asked of you and also what you might as well ignore”.

What began as humdrum proverbs (excuse me, but after seven years of Anglican high school, I get put off easily whenever someone quotes the bible) became words of wisdom and philosophy. Robinson gives the reader an intimate and humble view of another way of life, quoting John Calvin and atheist Feuerbach to make sense of John’s theological struggle.

John can also be funny and borderline cynical. What I liked about John Ames, and why he eventually grew on me as a character, was that he seemed as confused as most people, and never played up his wisdom as all-knowing. He is humble and caring, two traits pulled off without seeming wishy-washy, an admirable achievement.

Gilead has been discussed widely in literary circles, from Christian multiculturalism debates to Robinson’s own lectures on the misconceptions surrounding John Calvin. To put the cherry on top, it was also listed as one of Barack Obama’s favourite books.

A slow read, I recommend tackling this book during the holidays, when you want something to really occupy your mind. It is an emotional depiction of old age, and Robinson captures a passing life with poise.