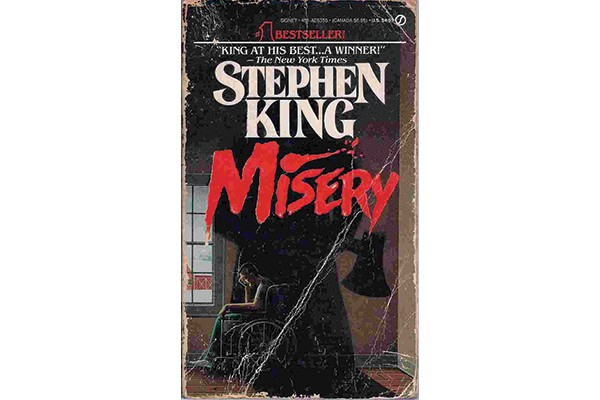 More often than not I come across a book I wish I had written myself.

Stephen King’s Misery is one of those books - not for any clever reason, simply because it is quirky, weirdly relatable (to a writer), and shit scary.

Word of advice folks: don't read when living alone in the country for two months. You'll end up biking to your granddad’s house at 2am just to feel safe.

An oldie but a goodie, Misery tells the tale of humble writer Paul Sheldon, famed for his period series about the character Misery Chastain. Paul gets into a car accident on an icy road and is ‘saved’ by former nurse and seemingly homey Annie Wilkes, who drags him into her little farm, well out of the way of civilization, and sets up to nurse him back to health. Here’s the kicker - turns out Annie Wilkes is Paul Sheldon’s number one fan, what a coincidence!

As time progresses and the book moves on through Paul’s excruciating pain (his legs are shattered), we are almost fooled into thinking sweet Annie is just a lovely little spinster eager to help. But things go from 0-100 real quick when she learns something about her beloved fictional character Misery Chastain that she didn’t want to.

It is gruesome and surreal, but the characters are so solid that despite how violent and outrageous the situation gets it is always believable. King’s writing, in all of his work, completely envelops you in his world, so that no matter how painful it gets you just can’t leave. Misery is a book every writer should read; it shows the power of storytelling at its best; it never gets boring. The long painful process of writing is represented in Paul’s relationship with story and his return to the basics: just a chair, a typewriter and his mind. If only there wasn’t some maniac in the other room threatening to chop off his legs every day, it would be an ideal set up. Regardless, Paul moves into the flow of his writing (after the initial struggle), he even begins to enjoy it. Oddly enough some dark part of me kind of desired this situation… when you think about it, what surer way to crack out a complete book. What motivation!

Misery dabbles with the frustration most people feel when their favourite writer takes the story down a path they never wanted (eg. Charlotte’s Web #neverforget) and makes the fair point that it’s best to separate the artist from the art.

The book was also a response to King’s fans rejecting his novel Eyes of the Dragon, because it was fantasy, not his usual horror gig, and for some reason they felt cheated. King is chained to a genre as Paul is chained to his sickbed. The characters of Annie Wilkes and Paul Sheldon also stand as symbols of King’s addiction to dope, Annie being the drug, never really wanting to leave.

The whole book is riveting, every page will hook you and when you hit that last chapter you'll want to flip back and start all over again, I promise. After a breather, of course.