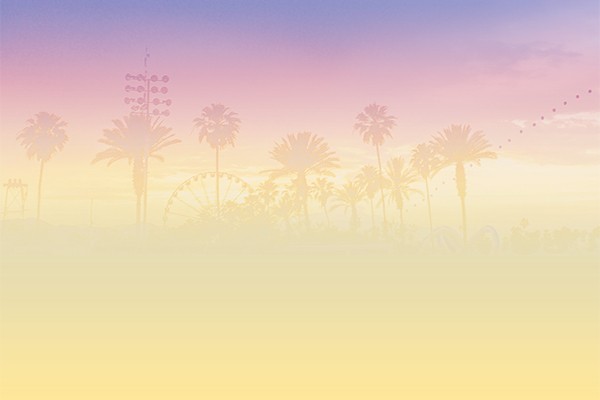 Over the Easter weekend I “live-streamed” Weekend One of the Coachella Music and Arts Festival. The stream is not really live - it’s delayed, and is sponsored by a German telco called T-Mobile. T-Mobile have a pink logo in the shape of a capital ‘T’, with two small pink squares that probably represent two takeovers in their company’s history that they are especially proud of. That logo is ingrained in my mind and forevermore associated with a song called Bad & Boujee. But let’s not get ahead of ourselves.

Coachella, or Coach if you’re an idiot, is the largest music festival in California. It runs over two three-day weekends. Weekends in LA are now three days long to allow time for almond shakes and travel. Coachella’s attendance this year was about 125,000. The population of Dunedin is 127,500. Imagine for a moment if almost everyone in Dunedin was wearing a traceable fluorescent wristband, dressed like a douche-bro, and tripping balls.

The headliners this year were Radiohead, Lady Gaga and Kendrick Lamar. I tuned in. Mac DeMarco was playing or maybe it was Mac Miller. One of the Macs. He was pretty good. He wore a nice hat with palm trees on it. And smoked some cigarettes and it was sunny. I started to develop a contact-dehydration. For his last song, Mac was interrupted by a member of King Gizzard and the Lizard Wizard. They traded insults before the Lizard Wizard was sacrificed to the crowd in a rather pleasant crowd surf. He was never seen again.

I switched to channel three and Broods were playing. I quickly switched back and Mac was being interviewed about his hat. Aha! This is how you do it! Switch channels! I checked the schedule and Glass Animals, Oh Wonder, and The Avalanches were spread out like a trifecta. I watched an episode of Rick and Morty instead.

Resumed play in time to see Father John Misty leave the stage. Excellent. Next up, the xx. They are a band from Wandsworth, London. The only good thing to come out of Wandsworth is Pierce Brosnan. He was in four James Bond films. As James Bond, no less. The xx are very shy and have never starred in a James Bond film. Romy Madley Croft from Wandsworth sounds like a Harry Potter character. On channel three DJ Shadow was beginning with a monologue about how he’s gonna play only his own stuff. He then played a bunch of samples. Legend.

Radiohead played a 17-song set and immediately the internet started to complain. I enjoyed it, especially when they walked off to fix audio issues. It meant it wasn’t just me. “Technical problems at a Radiohead concert are the definition of white people problems,” said someone, somewhere.

Highlights of Day One: Johnny Greenwood playing an organ with his guitar neck. Rick and Morty. Mac’s hat.

Day Two looked promising. Gucci Mane, Warpaint, someone/thing called Honey Dijon, which sounds like a tasty sauce. I set my alarm for Future. But forgot to factor in the time/day difference. I had a Back to the Future experience. Logged into the stream. The population was a steady 125,001. Each one of them was now in my personal circle of concern. Even Paris Hilton.

After a couple of hours I was totes bored. Bored out of my mind. Why the feck would you call yourself Brodinski? There is nothing that can possibly redeem this shambling mess. Except Future. Future is from Atlanta. He likes to f**k up some commas. A statement, I can, get be,hin’d. Somewhat unfortunately, a band called The Commons were playing at the same time on the Sonora stage. I imagine them hearing “f**k up some commons” drifting towards them. Future’s set was very much enjoyable. And then he brought out Drake, the Canadian Cellphone Salesperson of the Year. Brilliant.

Lady Gaga is the headliner but the live stream conflicted with Gucci Mane and I only like that one Gaga song that goes: (Rah)x2 (ah)x3 [roma (1+ma)] + (ga)x3. Gucci just got out of prison so it would be rude not to tune in. Also, it’s Gucci Mane! His first song was ‘First Day Out Tha Feds’. His set was 24 songs long. About half way through he handed it over to guests. Brilliant. I flicked over to catch some Gaga, but after Gucci Gaga felt kind of overwrought. I flicked back and Gucci was doing ‘First Day Out Tha Feds’ again! Amazing.

It slowly dawned on me that Migos had guest-starred twice in one day and performed the same song: Bad and Boujee. It made me feel a little uneasy.

Day Three. Kendrick Lamar is the headliner. Everything that happens prior to Lamar’s set will be rendered obsolete. Radiohead will crawl to Oxford and become well-dressed history teachers. The band Real Estate will consider a recession. BANKS will close. The only people who will hold onto any relevancy are Future, Gucci, and, somehow, Hans Zimmer. I wonder how that Lizard Wizard is doing.

Things start nicely with Toots and the Maytals. They are from the 1960s and Jamaica. The entire afternoon fades into a channel hop of burnt synapses and pointless bands. But surely DJ Khaled can inject some energy? Khaled is from Miami. He is famous for his hatred of jet-skis. He played really short versions of hit tracks. Migos appeared again and played ‘Bad & Boujee”. Again. It was a really funny, messy set.

Lorde was on the other channel. She had a great band. She was quite tense. I made a sandwich. And then Kendrick Lamar started levitating. He played ‘m.A.A.d City’. He played ‘Alright’. Future strolled out and they both did ‘Mask Off’. And then it was all over and I turned off the live stream and tried to figure out what day it was. My ears were twitching from the decibels. My T-Mobile Instagram had connected with the minds of Selena Gomez’s people. I was at one with the desert, at one with the people, except for Empire of the Sun.