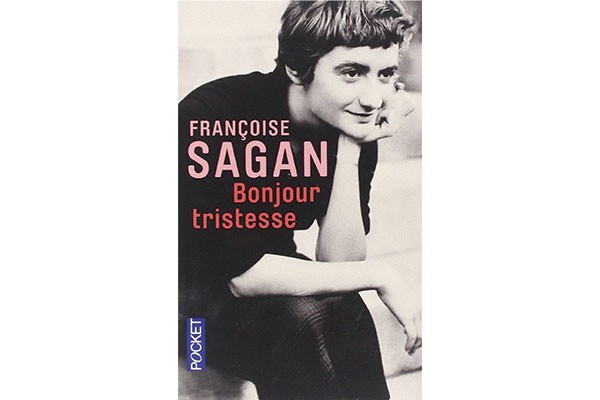 I read Bonjour Tristesse on my way back from France during a six-hour layover in Shanghai airport. I was pretty jetlagged. I won’t lie or mislead you; this is going to be an astral quest of a book review.

The Times cover quote reads “funny, immoral and thoroughly French,” which it is. The title, translating to ‘Hello Sadness’, denotes the general tone of the novel. Protagonist Cécile lives with her rich Dad in the south of France. Her life is really hard because he likes to take her to parties where he proceeds to smear the whale blubber lipstick of the French aristocracy on his cocktail shirt. What is even worse is that she is expected to have fun. Quelle horreure. Finally, some sense is injected into a narrative that had mainly involved sun bathing and forgetting to eat, when Dad’s ex-fling, Elsa gets with Cécile’s own hunk-a-spunk, Cyril. Both Dad and Cécile are like “whatever losers”. But this marks the beginning of a complicated four-way love triangle involving Dad, Cecille, Dad’s new wife, Elsa, and Cyril. Correction, five way love triangle. Maybe it’s more of a love pentagram, all the characters doomed to live out the infamous French love for affairs.

Sagan was 18 when she wrote this novel, which should make all of us feel unaccomplished. In this novel—aided by the juvenile writer’s best friend: first person perspective—Sagan accurately entombs the hugeness of the 17-year-old experience. Each character is robed in darling little vignettes of vices, crystal cut glasses, silk headscarves, wicker travelling baskets and white driving gloves; all of them waltzing through and slamming the door of Cecile’s one roomed life.

Scenes cascade from romantic tussles in the beeches, to slow jolting dinners, to drunken drives between bars, and the stillness of the rising sun. The introduction of my edition notes that the scandal that Sagan inspired when the book was first released in 1954 was in part because at the time it was unthinkable that a bougie (slang for bourgeois) girl could write such illicit content. I can’t help but think that a Sagan of our generation would have written the draft of this novel on the back of polaroids.

As I continue to reflect, I feel that Bonjour Tristesse is a eulogy for the teenage self. The side-sweep-fringe-wearing, My Chemical Romance listening, tamagochi playing, individuals who we think we haven’t grown out of. In a weird way, Bonjour Tristesse is one of those novels that encourage both nostalgia and the fight to regain the past (though not in the Republican sense of the phrase). It’s a novel that one wants to read with rose tinted glasses because it makes it seem like maybe there really was a better version of today.

Read this book because it’s everything that a John Green novel is not. It’s especially good if you’re having weird love life / sleeping with other people issues.