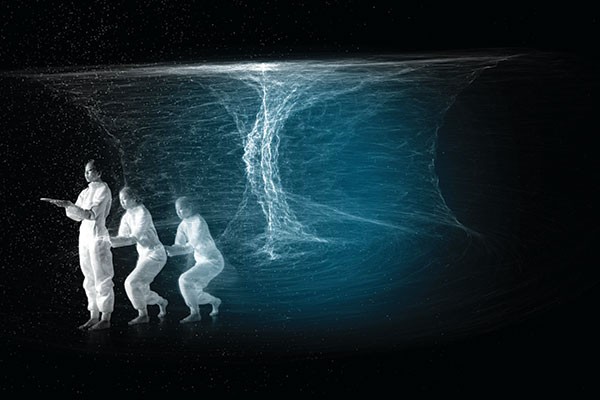 Beautiful, elegant, and led by a strong sense of purpose, Daniel Belton’s performance piece AXIS — anatomy of space intrigued and inspired audiences at its Otago Museum premiere. In refusing to align with one medium alone, AXIS combines dance with fashion design, celestial cartography, and contemporary music and sound, all presented in the unique space that is a 360° dome theatre. As audiences recline and gaze skyward, backdrops of stars slowly drift overhead, overlapping with the soft movements of figures and abstract animation. Guest dancers from the Royal New Zealand Ballet don ethereal costumes made by Tanya Carlson, while human voices form an abstract vocal soundtrack, alongside a collage of sounds from soft scraping to organic rain. Animated white lines chart the trajectory of the dancers as their positions overlap in time, waving discuses in semaphor—like movements.

As a concept, I like what Belton is going for here. By connecting seemingly disparate artistic mediums a new type of dialogue is formed, in which the trajectory of planetary bodies becomes intrinsically linked to the movements of human ones. The same visual system that we use to chart the stars can also be used to chart music and dance; human bodies fluidly find alignment with the horizontal lines that transverse the sky, while the organic soundtrack provides another type of alignment; between visual and audible art.

And yet something ever so slightly missed the mark in AXIS. 360° theatres allow artists a fantastic level of immersion for their audiences. Unlike a traditional theatre, where the action is occurring in one fixed area in front of you, dome spaces allow viewers to feel entirely surrounded and enclosed by the art. At times AXIS does achieve this exceptional state of immersion, particularly in those otherworldly moments when the action occurs above rather than before the audience; these moments were definite strengths.

However, the majority of the work doesn’t allow for this immersion. Rather, the action happens in front of the viewers, functioning in much the same way as a traditional theatre screen would. The silhouettes of the seats in front of you puncture the illusionary possibilities of the dome space, and at times I even found myself looking upwards, away from the intended focal points, to simply gaze at the stars as they rolled by overhead. If 360° theatre is selected as an artistic format then I expect that medium to be taken full advantage of and immersion to be a top priority; in AXIS, this did not seem to be the case.