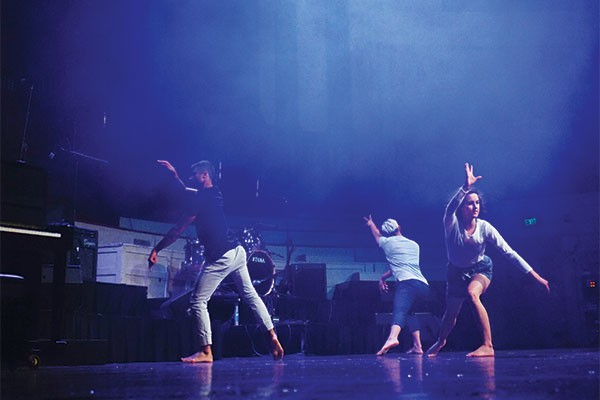 Some people, myself included, struggle with dance and performance art. Much like academia, it can be hard to interpret, self-serving, and, quite frankly, a bit boring.

Well, Fabricate, fresh from the Dunedin Fringe, was definitely not boring. Instead it was a well-designed and performed work, filled with tender moments and natural, yet highly technical, movement. The dancers began by creating a giant cat’s cradle from string in the corner of the room, which became the location for an early and poignant solo from Lydia Connolly-Hiatt. String was then used throughout the performance, acting as a subtle motif; the string would create relationships, link the audience and the performers, and then disappear again.

The dancers were clearly friends as well as collaborators. At moments throughout the performance, they shared a smile, or stifled a giggle, before returning to the serious business of wrapping each other in string, or leaping onto each other. These tender moments felt like an intuitive part of the choreography - however I’ve seen a lot of similar material before.

I was left feeling the same way about Fabricate’s subject matter. Exploration of the human condition is a theme that regularly crops up in performance art, so Fabricate didn’t offer anything ‘new’ in this sense. Yet, despite the work’s predictability in parts, it concluded in an unexpectedly shocking manner, which simultaneously terrified and delighted the audience. Definitely a standout moment.

Mention must also be made of the simple and effective costuming (the cast clearly got a good deal at AS Colour) and atmospheric music. The Fortune Theatre’s Murray Hutchinson Studio is a perfect setting, and well lit. The whole production team clearly put a lot of work into creating a show that was slick, simple and effective.

If none of this makes any sense to you, hit up a contemporary dance performance yourself. It’s really a mixed bag. There’s a 50/50 chance you’ll hate it. But if you stumble across something as well made as Fabricate, you’ll be hooked.

Fabricate won Best of Dance at the Dunedin Fringe 2017.