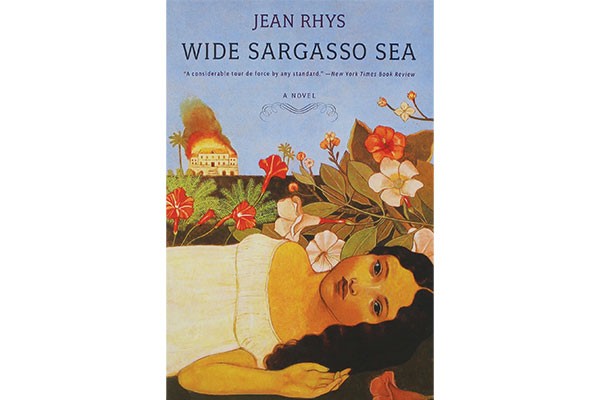 This book lives on my bookshelf, in a case, with a plaque underneath: ‘A Modernist Triumph of Femme Freedom’. In 1969, Jean Rhys published Wide Sargasso Sea, a prequel and intervention to Jane Eyre, much like the prequel and intervention of my flatmate telling me I am cunty vomitty person the day after a party. However, where my flatmate sets a house on fire, Rhys burns it to the ground. This novel deconstructs the hysterical woman, especially as portrayed in the ‘feminist’ gothic text Jane Eyre.

Where Bertha in Jane Eyre is an elusive creature, so too is the tumbling narrative of Wide Sargasso Sea. The way the protagonist’s focus sways from the heave and seethe of the Caribbean jungle to her decomposing marriage lends itself to post-post-colonial dialogue. The diverse backgrounds of the novel’s characters result in jumbled conversations – imagine an onion or a meme, but with more layers. Each character’s neurosis informs the neurosis of the next. I’m not going to lie; by the end of it all you should probably feel just as confused as the protagonist, Antoinette, feels. I was reminded of the random gift shop one sees as they drive through Ashburton called ‘Intangible Gifts’, I don’t know what intangible gifts are, but this novel certainly feels like one.

The re-imagining of ‘black-faced’ Bertha Mason to coy, coquettish Antoinette Cosway gives a sense of youth to the protagonist, thus Wide Sargasso Sea could also be classified as a post-modern bildungsroman. The three-part structure creates a hashed and sutured romance, with all the romance left out. Antoinette is lost to this tangled narrative, the threads all running away with the entropic ends of time. As a child, Antoinette is like a hatpin to her mother’s extravagant and unsustainable life style, by the time she is a teenager, her creole status finds her abandoned by the locals and the civilising British class. However Antoinette, finding herself alone, is never an independent character, her conversations are loose strands of the societally held prejudices that she guilelessly navigates through. It is never clear whether Antoinette is aware how different she is to the people that swan in and out of her life. Enter loaf-ish, dismissive Rochester, the same paternalistic, dramatic, patronising man that Eyre naively falls for. Arguably, it is whatever that marks Antoinette as other that staves off Rochester.

This is a baffling read and for such a short novel, it is surprisingly dense. Not because of the content, but because of the space that the narrative is meant to occupy. Wide Sargasso Sea alleviates the limitations of Jane Eyre, and celebrates the existence of a) humans and b) women, no matter their mental state, background or role within society. Like a Lana Del Rey song, Wide Sargasso Sea works to validate and celebrate self-indulgent sadness; it is a love letter to the tides of hedonistic apathy, commiserating the vilification of those who suffer loss without need for redemption or forgiveness. Most importantly, Rhys drives for the continuation of the human voice through dissolution to insanity. In short: it’s a good time.