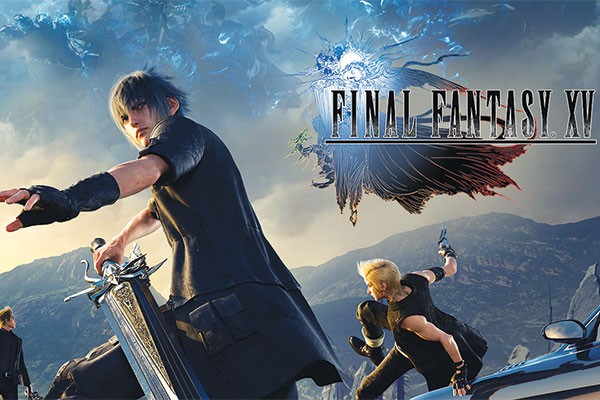 For thirteen hours, I have watched four cosmopolitan titans of men slide through the air like greasy hamburgers. Ignis clicks his gloved fingers and a meal of bacon and eggs materialises. He sits silently as Noctis picks at it with a fork. Prompto proceeds to writhe on the ground. In the morning, Gladiolus screams “You’re on fire, today” three times in a row to nobody in particular, before stepping awkwardly close to Noctis. Noctis turns his head away, but the tension only grows.

There is an existential terror that cannot be escaped in Final Fantasy XV. After thirteen hours, I have come to realise that the banal foreign-invasion-as-analogy-for-puberty narrative is simply a backdrop. The characters have the emotive capacities of lemons. They lack all definition, formed into shape by a narrative Deus that has granted sexy haircuts and coats in place of souls; they are a hollow exterior surrounding a hollower core.

Final Fantasy XV is, at its core, a road-trip simulator. You drive along highways, stop at gas stations, explore nature, hunt animals and camp beneath the stars. Of course, these bonding activities do not connect one with nature, but with one’s onii-chan buddies. There is no ecosystem in the world precisely because the animals are simply toys for the manchildren. All seems to fade in the wake of the interactions of these awful characters.

The journey began when I forced my flatmates to purchase the game with me. Perhaps that was a projection of my own expectation of phony in-game camaraderie. “We’ll play it together,” I said, “it’ll be awful.” What I received, however, was truly profound. On the surface the game is as predicted. The characters crack awful jokes, bond over their hobbies and fist-bump after successful fights. Broody-Chan grunts strangely when he interacts with people; Macho-Chan yells at Broody-Chan to punch harder; Library-Chan is Wikipedia in its pubescent anal-retentive stage; and Kooky-Chan talks about getting with some of those women things. I initially felt nauseated, awash in a sea where the only way out was to drown, but then I began to see a depth to their shallow interactions.

The deepest and most harrowing hollow of Final Fantasy XV is its unfettered masculinity. Let’s be honest, masculine bonding sublimates the erotic into the higher arts of driving cars, hunting animals and devouring flesh. These acts are a substitute for a pleasure that is denied by existence itself. To exist like this is to be divorced from others and limited in expression by one’s own imperfect language. One can never fully understand the Other. Loneliness, then, is a condition none can escape. Rather than rebel against this absurdity, masculinity castrates thought and emotion entirely, until only action is desirable. One reaches not for an idealised Other, but for reaching itself.

The characters in Final Fantasy XV know this all too well. Though they may act like a businessman’s attempt to write teenage characters, in truth they are the most profound embodiment of the human condition since Neon Genesis Evangelion. Sentences are forced, scattered and unfocused. Lines repeat over and over again during battles and car rides. Prompto hands you photos of Gladiolus’s ass after dramatic story events. Interactions begin to merge into one long, terrible cry of despair. One begins to see the awkwardness as intentional. It is an imitation of connection, of masculine revelry, of purposeless horror. The characters don’t want masculinity, but they have pretended for so long that they can’t connect in any other way anymore. The very artifice of their relationship is the only genuine thing in existence. They are a modern-day Sisyphus; eternally rolling their totally sick rims up highways, only to be towed back to Cid’s when they eventually run out of fuel.

This lurid celebration of masculinity is uncanny and frightening. Bodies twist into erotic postures; weaponised phalluses slam down on flesh under the heaving sun. The protagonists sneak sultry peeks at one another. One of them screams “No mercy!” at the thought of his own painful existence. He yells it again ten minutes later. Nobody comments. There is no need. Hell is known, but cannot be voiced. If the eroticism underlying their masculine bond were ever unleashed, despair would froth over and consume them. These sexy models are not allowed to overcome their impotent language through the sordid pleasure of consummation, as it would be too real to be genuine.