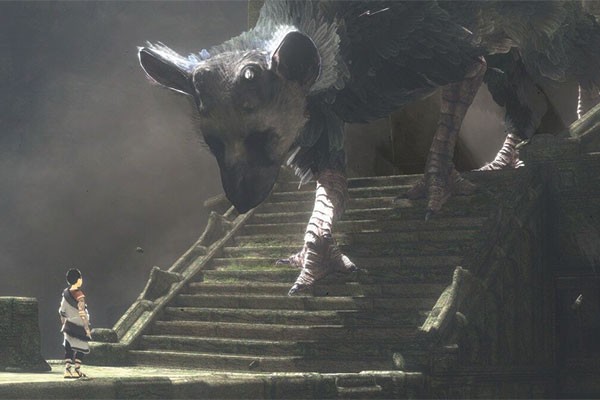 I think The Last Guardian was inevitably going to be a bit disappointing. Its director, Fumito Ueda, has such previous games under his belt as ICO, a puzzle platformer with a dedicated cult following, and Shadow of the Colossus, an abstract adventure game that is considered to be one of the best games of all time. After a development time of about ten years, including numerous delays, it is clear that the creators of The Last Guardian wanted it to be perfect. I don’t think they succeeded, but that doesn’t stop it from being one of the most quaint and heartfelt games that I’ve played in recent months.

The plot of The Last Guardian is about as sparse as you can find in a video game. You play as a young boy waking up in a derelict ruin with mysterious tattoos all over your body. Next to you, asleep in its chains, is a giant… thing. It appears to be part cat, dog, eagle and bull, and is called Trico. Though Trico is aggressive at first, it becomes tentatively friendly after you throw a couple of barrels of food into its mouth. It soon allows you to climb over its body while it jumps and runs around. So begins a fantastical journey to escape the valley in which the two of you are trapped.

The Last Guardian feels magical. The sweeping score and art direction have a gentle curiosity to them, the atmosphere of the green and vertically scaled world you travel through is lush beyond words, and the climax of the game feels almost transcendent. It is truly uplifting to finally play a game that gives the player room to breathe, to take in the gorgeous world around them, and to develop a bond with another animal.

Having said that, The Last Guardian has plenty of faults. For instance, I was initially frustrated by the decision to give the game a narrator – the main character as an old man. It is implicit that you survive the events of the game. So, given the heart-breaking nature of Fumito Ueda’s games, that means Trico must die, right? I will leave you to find out whether that happens or not – it is likely that you will be surprised.

The game’s narrative tends to grind to a halt in a couple of places. The first is with Trico himself. Part of why The Last Guardian took so long to make is because the developers wanted Trico to feel as much like a real animal as possible, so that you could develop a relationship with it. In this, they have definitely succeeded: Trico sneezes, scratches, yawns, rubs its head against you affectionately, and rolls around in water if left to its own devices. If it is too panicky, you have to pet it to calm them down. However, frustratingly, Trico will sometimes ignore your commands —just like a pet would. This is deliberate. The game demands that you play slowly and patiently, and give its deuterogamist the benefit of the doubt, so that the later parts of the game feel more rewarding.

It is clear that the creators of The Last Guardian wanted the game to be a cinematic, pulse-pounding experience. This is awesome in both concept and execution, and the groundwork is clearly laid for it. But there are a couple of moments where I had to look up a walkthrough to figure out if I was doing something wrong. There is more than one sequence in the game where you are clearly required to jump off a collapsing platform into thin air, whereupon a terrified Trico will desperately swing their tail for you to grab onto – but that only works if, three times out of four, you don’t arbitrarily miss their tail and plummet to your death. Fortunately these mistakes are few and far between (patches have recently been released to fix them), and there are plenty of other adrenaline-filled sequences to make up for it.

The Last Guardian is a unique experience. I found myself getting genuinely attached to Trico in the final third of the game, and was sad to reach the end. It feels like a Studio Ghibli movie, in adventure form.