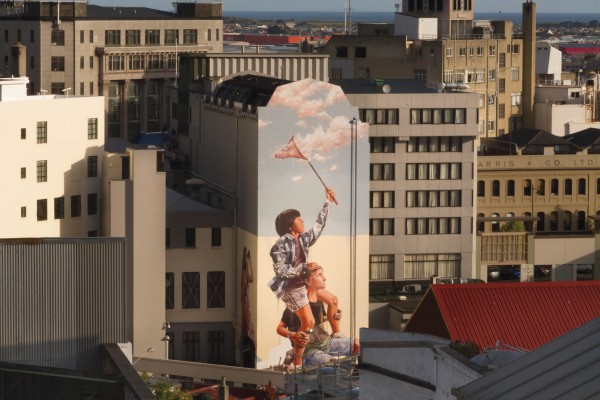 During recent years, the urban art scene has taken Dunedin by storm. Our buildings are becoming a canvas for internationally renowned street artists, who have been flocking from all over the world to make their multicoloured mark. These unusual artworks are a far cry from the graffiti-style tags or spray-can stencils that are often associated with street art. These urban murals have forged their own artistic niche - and they’re redefining what urban culture means in Dunedin.

One particular artist has already made a lasting impression. UK based cartoonist and illustrator Phlegm has created a number of pieces around the city. His work is often inspired by graffiti and can be found inside derelict buildings, where he transforms run down urban spaces into brilliant artworks. There are a number of Phlegm’s quirky murals to look out for around the city. There’s the three-storey high painting of his signature fantastical characters riding a Moa, which can be found on Moray Place. There’s the bird perched on a stormwater outlet, poised to eat its lunch, down by Second Beach at St Clair. And then there’s the giant fish on Vogel Street - its mouth open wide and rows of teeth sharp, as ships sail peacefully and unknowingly into the darkness.

Another piece that has drawn considerable attention is the majestic, scaly creature on Bath Street. The piece was done by ROA, a world-famous street artist from Belgium. The beautiful monochromatic mural features a tuatara laid on its back with its tail between its teeth. It’s playful, brilliantly crafted and unlike any other mural in the city—this piece is not to be missed.

Natalia Rak’s mural ‘Love is in the Air’ is a personal favourite of mine. Polish born Natalia spent about a week working on the four-storey high piece, which shows two young children sitting on a bench, the boy eating a lollipop while the girl gives him a kiss on the cheek. The artwork is a symbol of love and innocence - a positive message immortalised on Bond Street.

Street art can be practical too. Two 3D crossings are currently being installed on Clyde Street. These works will show feet walking under zebra stripes, with the aim of catching pedestrians’ attention before they cross. One of the crossings is just north of the Leith River and its design will have a watery, river theme. The installation of these artworks began at the beginning of February, and they’ll be completed by the end of the month.

There are guided tours of Dunedin’s street art available, but if you’d like to go at your own pace, no doubt stopping off at some of our city’s delicious coffee shops along the way, check out the Street Art Dunedin Facebook page for some idea of where to start.