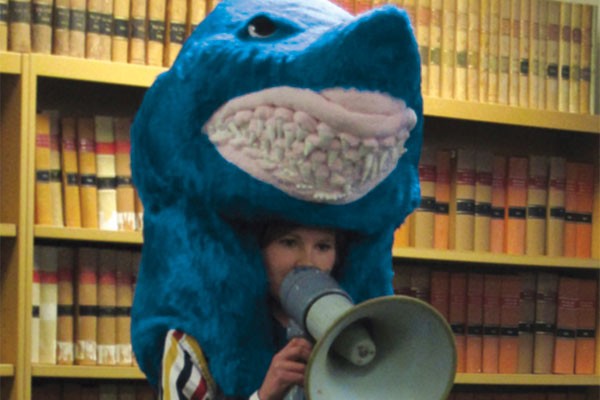 With the University’s plans to build a large animal research centre, animal rights is currently a contentious issue. The artists displaying in Animal Advocates use their work to demonstrate their concerns about animal exploitation.

The animals depicted in this exhibition have a ghost-like element. Animals are shown with a tenuous hold on existence between their natural habitats and the man-made world. The prevailing monochrome of the exhibition adds to the unsettling connection.

You may recognise Rachel H Allan’s name from the current DPAG Ridiculous Sublime exhibition. Her Animal Advocate pieces are capturing those who dwell behind the glass - alive or dead. These prints of animals have a mythical quality. Threat hangs in the air.

Milford’s work ‘The Wait’ is done in fine, intricate ink on paper. Both beautiful and disturbing, the eyes of her dog are empty, its side skin open to the bone - yet its pose is that of a live animal. Milford says: "To me, the idea of a conscious being, unable to comprehend the violence against it; for its skin or flesh to be the object of desire, not out of necessity but for pleasure is macabre."

Cossens' video of 'I Didn’t Choose the Shark Life, The Shark Life Chose Me' was, when I was there, stuck on a still of a person entering a supermarket wearing a shark head. For the opening of this show Cossens and a friend recited the common names of 201 endangered sharks to remind people of the animals’ fragility.

Along with Cossens, Bloxham graduated with a BVA last year and his work featured in Auckland's White Night. He displays sizeable charcoal and chalk pieces of dead fish, their eyes wide and mouths gaping. 'Lowlife' is a screen print with a dead dog, caged chickens, a rodeo scene - cruelty exposed. Bloxham took his work outside of the gallery and pushed it on the public. In the only coloured work in the exhibition, 'Urban Display of Lowlife', Bloxham has documented what happened when he pasted posters of his gruesome ‘Lowlife’ works around Dunedin, recording where they had been left alone and where they had been removed. Go Daniel!

Perhaps now some Otago Law graduates will go out into the world as animal advocates.