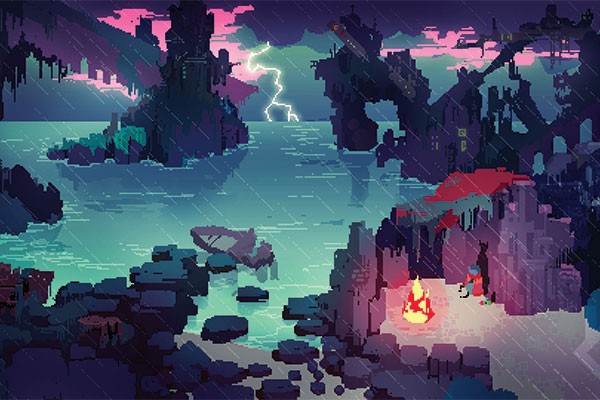 Hyper Light Drifter completely passed me by when it was released near the beginning of this year. I was already familiar with images of its protagonist: a caped, androgynous adventurer, in a world defined by 16-bit pixel art and heavily contrasting colours. I had heard that it was difficult, and I love a good fair challenge in my games. When I finally bought it a few weeks ago, I was pleasantly surprised: Hyper Light Drifter is everything that I was led to believe it was, and more. It’s a psychedelic, dream-like adventure. This is what all retro-style hack-and-slash adventure games should aim to feel like.

The first and most astonishing feature of Hyper Light Drifter is that it has no spoken dialogue. The opening cutscene tells a very obscure story: the world you live in has undergone an apocalyptic war of some kind, and you have risen from the ashes with a sickness in your belly. You are left to wander through a strange, beautiful, semi-inhabited land, drawn by a diamond-shaped light that occasionally haunts you, and evading creatures made of darkness that try to devour you. Along the way, you are saved by another traveller wearing a Spartan helmet—is this the Drifter of the title, or are you?

Nothing is spoken, nothing is conveyed in text. Everything is told through images. Even when you are talking to the inhabitants of this land, they speak in a slideshow of images that literally paint a picture of how they escaped from barbarians who pillaged their town, how they became imprisoned, or how their point of view on how the apocalypse happened. While you are travelling, the features of the scenic vistas around you tell a story—the first that you are likely to come across is what looks like a colossal automaton that froze while clambering up the side of a mountain. If you can, play this game with speakers and a screen that are as large and as loud as possible—the exquisite music and sound design of supplement the game’s surreal and cyberpunk atmosphere. It’s as though someone took Vangelis’ soundtrack to Blade Runner and remixed it so that it changes dynamically depending on what you’re doing or looking at.

There’s a curious simplicity to Hyper Light Drifter. Whenever your character feels sick, static flickers across the screen as though you are actually inside a computer-generated world. You feel like an invader intruding on a place where you don’t belong; nobody else looks like you, except for the Drifter who saved you. There is the recurring number four throughout the game’s world, usually in the form of diamonds: four corners of the map, four experience points required for each upgrade point, four large beacons to activate. You must infer from symbols and animations what upgrades for your sword, gun and dash ability do. This could have been alienating, but the game is well-designed enough for it to be easy to figure out what to do. I love games that do this. Hyper Light Drifter doesn’t hold your hand, but it puts faith in your intelligence as a player.

I have not yet finished the game, but I was greeted with a very sharp spike in difficulty by the time I got to the first boss. The mechanics of the game are simple enough, but enemies can very quickly overwhelm you—and to drive that point home further, the number of medkits in the game’s world is finite. But this forces you to improve your skill at the game. It indirectly teaches you to use your items sparingly, and to significantly improve your reflexes and your aim. It’s a challenge, and your skill has to be pixel-perfect in later stages of the game, but it’s hugely rewarding if you can bring yourself to pull it off.

So much love and care has been put into the production of Hyper Light Drifter. It’s a magical journey, and one that is well worth its price tag. This is the first new game in a very long time that has actually gotten me excited. It’s dark and colourful! It’s attractively mysterious! Indie game developers still have the golden touch!