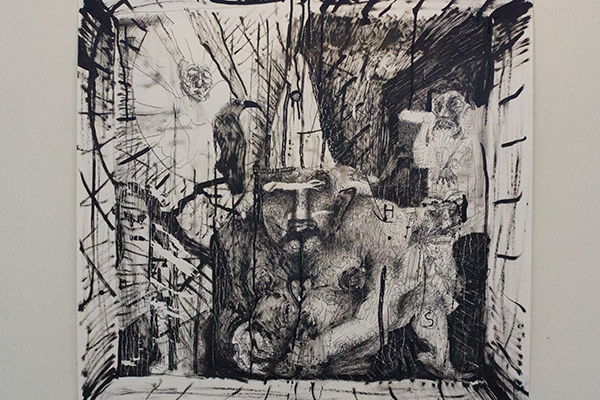 Works by Felix Harris and Mate Pavic is an experience in the darker parts of humanity. The two artists were paired by gallery owner Inge Doesburg, who saw Harris’ work and contacted Pavic in The Netherlands.

Pavic’s works look as though they have been done in a frenzy, with black ink scratched and splattered on the white paper. He works spontaneously without planning to create his nightmarish figures. Faces appear in the slashed lines, animals have humanoid faces and humans animalistic qualities. The white background is obliterated by violent lines smudging to make shadows, curling to form fur, and crisscrossing to create blackness.

Harris’ works are a mix of bright coloured figures that blob together like internal organs. A scared looking horse reaches out a human hand to touch a bent-over human bottom, two disembodied heads have a slack-jawed conversation, and teddy-bear heads with gore-covered mouths float with maniacal smiles. The words “BABY ARE YOU THERE?”, “CHILDREN ONE DAY”, “MY SALVATION”, and “STALKER” lurk between the figures, reminding us of the unsettling intensities of intimate relationships. Another work depicts a serene woman’s head, in profile, surrounded by an exploding halo of colour and topped with an angry, half-naked mob. It feels like a contrast of peace and derangement in the human mind.

This exhibition is over, but Inge Doesburg will have new works by the Salander Group on display for the OUSA Gallery Crawl on Thursday night, including prints by Doesburg herself.