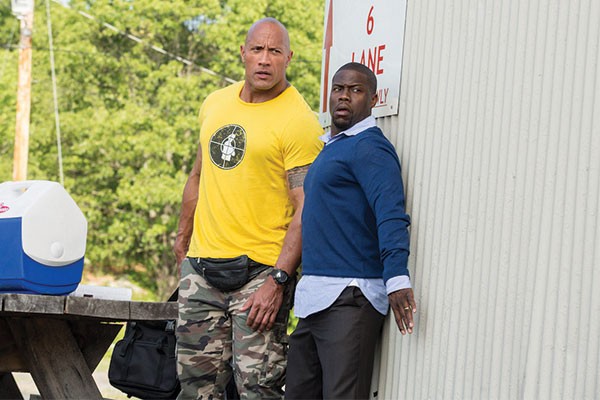 The central aspect of a buddy cop/spy film is the “buddy” part of it. With the tagline “saving the world takes a little Hart and a big Johnson” it becomes apparent that in Central Intelligence, the “buddy” comes from not just the characters, but also the actors. While it’s hard to call Rawson Marshall Thurber’s action comedy an overly compelling film, I can at least say the less-than-impressive story is substantially carried by the two leads.

Central Intelligence is about a former high-school bullied geek turned CIA Agent, Robbie (Dwayne Johnson), teaming up with old friend and accountant Calvin Joyner (Kevin Hart) to assist him on a case featuring a large-scale money scamming conspiracy. Cue fun gun and run action scenes and zany, quirky, screwball humour. The film’s focus is almost never on the actual CIA case. It’s about the relationship between two former friends, which is made believable by its stars, despite the pitfalls of the script. I could probably be told there were parts of the script that said “The Rock and Kevin Hart Say Stuff To Each Other” and actually believe it. The two actors appear genuinely invested in the project.

The action breaks up each plot element, and I enjoyed myself enough to not be bored stiff, mainly due to the comedic energy that bounced between the leads. That being said, I do have to point out that the film’s errors start to show a little more than necessary when considering the length runtime of the film. It’s all well and good to have a brief, fun, comedy duo move through a generic spy story, but when that copy-paste story runs for almost two hours I have to stop giving credit to its primary (and only) highlight.

It’s not intelligent, and it’s not amazingly enthralling, but Central Intelligence has an overwhelming amount of comedic chemistry and a more than evident relationship between Johnson and Hart. If you’re looking for a fun action-come consider seeing this film, but don’t expect anything more than the actors themselves to be memorable.