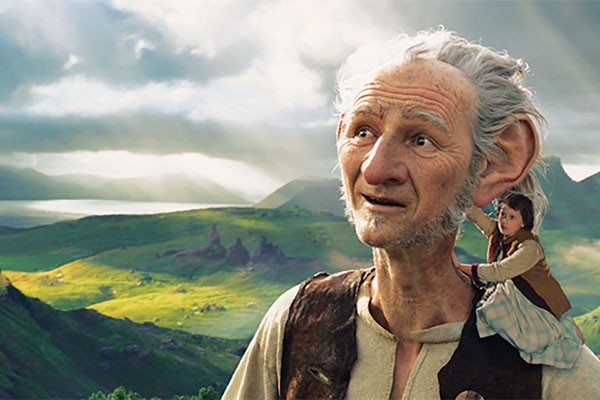 The BFG was my favourite childhood book by Roald Dahl, and as far as my distant memories of the book go, the movie does it justice story-wise. So why is the movie so dull? I’m really not sure, but here are some observations.

I didn’t find myself caring about either the titular Big Friendly Giant, or the orphan-protagonist Sophie at all during the movie. In the book the Giant is a lively and likeable character, but in the film he just seems like the inebriated weirdo who talks to you on the bus late at night. And Mark Rylance’s delivery of the excellent Dahl-language (“frobscottle, gropefluncking, squiff-squiddled etc.”) somehow makes it sound about as interesting as tax accountancy jargon. To give some context, Veruca Salt’s delivery of the word “snozzberry” in the 1971 Charlie & The Chocolate Factory adaptation was more characterful than all of the BFG’s line deliveries combined.

In the role of Sophie, actor Ruby Barnhill avoids the pitfall of overacting, but sadly she also undershoots it; the character is in an aloof/mildly-perturbed mode throughout, despite being in constant mortal peril (and you know, hanging out with a giant). The movie is also a bit more low-brow than I remember the book being—I don’t recall anyone getting bashed in the nuts in the book (admittedly it has been awhile since I read it).

The digital effects, by Weta, are incredibly good: the shots of the BFG galloping through the English countryside, the dream-silhouettes, and the old-timey London sets.

Overall I’d say this is probably the worst Dahl adaptation to date—which isn’t as damning as it sounds, since the others are all pretty excellent. I suppose The BFG is a pleasant enough movie, and kids might enjoy it. But it was a big surprise when the credits started rolling and I saw that it was directed by Spielberg. What the hell?? He could’ve done much better.

I’m still holding out for a film adaptation of The Minpins and/or Charlie and The Great Glass Elevator—hopefully they’ll exist one day, and be better than this.