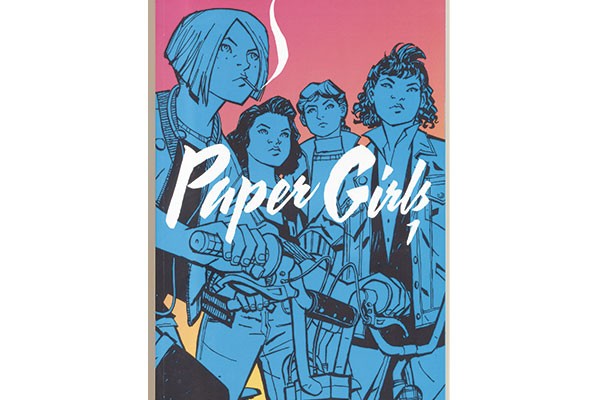 Opening this graphic novel is an eerie, creepy dream sequence, depicting some kind of angel of death. The protagonist wakes up and we are introduced to Erin, a 12-year-old girl who has just started a job doing the paper round in her neighbourhood. In the early hours of the morning post-Halloween, she sets out on her bike to deliver her round. Unfortunately, she is interrupted by a gaggle of teen boys who attempt to intimidate and threaten her. However, a group of fellow bike-riding, paper-delivering, totally-badass 12-year-old girls show up to defend her. The group decide to ride together for the morning, for safety’s sake. There’s a cute moment where Erin recognises the groups natural leader, a pink haired girl with a cigarette hanging out the corner of her mouth, and calls her the “Amelia Earhart” of girls like them – she paved the way for girls in her neighbourhood to get paper round jobs. This all seems fairly low key, but from here on out the graphic novel escalates quickly into a compelling mystery. Three hooded men, speaking an unknown language, appear to be following the girls. After the aforementioned creepy dream, this seems quite ominous. The situation continues to spiral out of control, as all parents, family and adults begin to vanish, and creatures (Demons? Aliens? We don’t know!) begin to descend upon the neighbourhood. It appears that our group of 12-year-olds are going to have to resolve the problem.

Things tend to get pretty weird pretty fast when Brian K Vaughan is writing - and not a bad kind of weird; the perfect kind of weird. Vaughan is the mastermind behind other graphic novels such as Saga, Y: The Last Man and Runaways. He commonly writes character based bizarre fantasy. He’s a brilliant author that builds fascinating worlds and complex characters with believable motives and quirks.

I loved Paper Girls. I loved it from start to finish, and I read it all in one sitting, unable to put it down (although this is no real feat - graphic novels are relatively fast to read). I have no complaints, other than I have to wait a year before I get the next one. The craziness of the plot is totally acceptable, it’s confusing, but you’re confused along with the four leading girls. It’s quickly apparent that the comic is set in the 80’s based on the outfits, objects, setting and dialogue, without it having to be stated directly. The pacing is ideal, not too much action for too long, and nothing seems to happen too abruptly, which is an issue I find I have with comics a lot of the time.

It’s so refreshing to read something by an author who knows how to write female characters. More often than not, in comics especially, women are left on the side lines. Vaughan never allows this to happen, in any of his work. It’s awesome to read about a group of young girls, typically the helpless victims, make decisions for themselves and take no shit.

If, say, you don’t like reading – this book is still worth picking up just to look at the art alone. The artist Cliff Chiang, colourist Matt Wilson and letterer Jared K Fletcher have worked together to create something stunning to behold. They have brilliantly brought to life the characters written by Vaughan. The expressions and posture of characters, the colour and style is on point. Even the lettering used for different characters gives a sense of personality and voice. The cover is beautiful, simple and perfect.

I loved everything about this book. It was amazing to read. I can’t wait for the next one!