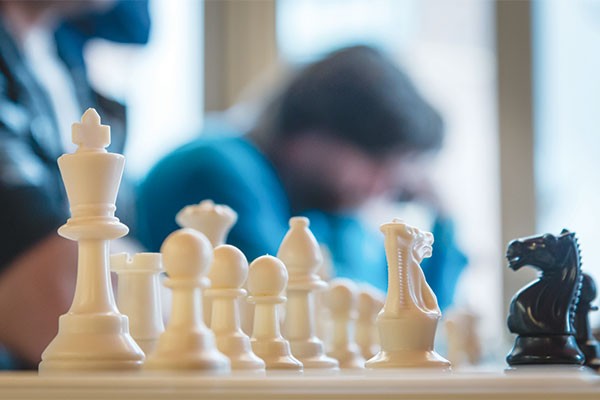 Board Game | Designed by a bunch of dead people

War is hell. This is a truism that has rung throughout the ages, with generation upon generation learning nothing from their predecessors. It is a morally and pragmatically complex business, with endless arguments about the necessity of some wars versus the abhorrence of others. Even in the times of the medieval feudal system, war was brutal and dishonourable. At least, this is what we must believe in spite of Chess’ depiction of medieval war, which turns all potential for a game about the morality of war into an abstract tile puzzle.

Chess is a game with a contradictory history. I was first introduced to it as a child, when I was given what I thought was a real-life adaptation of Wizard’s Chess from Harry Potter and the Philosopher’s Stone, the best book ever written by anyone anywhere in the world ever. I had no interest in playing the game back then because I was too busy thinking about my life and being cool. Wikipedia, however, informs me that Chess is actually thousands of years old. My interest was piqued by the idea that people today are somehow still interested in playing a game that dates back to a time when wizards and witches might have actually existed before the Catholic Church had them all killed.

My problems with Chess started as soon as I opened the box. For a start, there were no rules included with my copy of the game, meaning that the makers of this impenetrable game have assumed that new players will automatically be able to figure out how to play. One player is white and the other is black, with the white player always starting first. Yes, just like in real life, you immediately have an advantage if you arbitrarily happen to have been born white.

All of the units are absurdities. Pawns are the most common and annoying, as they can only move one space at a time. An exception is made for their first move, where they can move a legendary TWO spaces as though they launched forward with an optimistic battle cry and then suddenly got cold feet. There is one garbage rule where if you get them to the other end of the battlefield then they transmogrify into whatever piece you like, but that is just stupid. The knights are simply horses without riders, and they move in an erratic tetris-brick-shaped path for no apparent reason. Bishops are more useful, as they are able to move however far in any diagonal direction, but their presence on the playing field disturbs me. I have heard of bishops blessing soldiers before battle, or rallying to provide medical care. I have never heard of members of the clergy throwing off their robes to join in the gory violence themselves. Finally, castles can move just as efficiently as the bishops can. Apparently we are living in a time when buildings can jump up and hobble around like a man hiding in a wheelie bin.

It is refreshing to see some feminine empowerment in the form of the Queen, especially considering the mega-sexist time that this game originated from. She has the ability to move any distance in any direction, provided none of your own units block the way like the expendable scrubs that they are. However, her power is undermined by the fact that she is subservient to the king, who is utterly useless yet is still inexplicably in charge of everybody else. Hopefully this will be fixed in an update or expansion pack, but I remain pessimistic. Anyone with even a basic education knows war cannot be this disorganised. And people have dedicated their whole lives to mastering this game! The nerve!

Chess is possibly the most turgid, disappointing game ever created. What a waste of time. The TV was invented so that we wouldn’t have to strain our delicate brains with excessively intricate “games” like this. If you want to lose a couple of faux-intellectual acquaintances quickly, introduce them to Chess. And then you can have endless arguments with your friends about whether professional Chess should be classified as a “sport” or a “game”. Or maybe just a “collection of objects”.