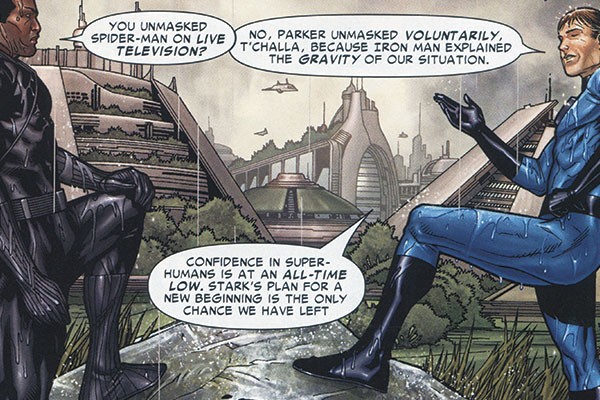 There are hundreds, if not thousands of vigilantes, superheroes, and supervillains in the Marvel universe. They battle regularly. Cities burn, buildings fall, and there are always going to be human, civilian casualties. This is what Mark Millar’s Civil War is focused on. This Marvel event addresses the issue of having masked, anonymous heroes gallivanting about doing what they believe is right, with no accountability to the law, and how this inevitably impacts on the very people they’re attempting to protect. Following the deaths of several civilians, people call for heroes to be registered, unmasked, and made into government employees, so that there is some level of accountability. After attending a child’s funeral (one of the casualties) and being confronted by the deceased boy’s mother, Iron Man decides that enough is enough and leads the march towards registration and increased accountability. Captain America, on the other hand, believes that this is ultimately wrong and a violation of the free will of heroes —they are volunteers, they want to help, having their identities known will lead to them and their families being targets. Thus begins a Civil War between heroes.

Mark Millar wrote the comics for Wanted, Kick Ass and Hit Girl, as well as Kingsman: The Secret Service (all awesome comics AND movies - definitely recommend). So I say this with some sadness: while this is a very interesting idea for a comic to address, I do not think it was handled very well.

There’s never a really good scene featuring discussion between the two spearheads of the story and everything seems a little over the top and dramatic. Some of the dialogue is quite heavy handed and as a result not really believable. While Civil War attempts to make the reader feel as though either side could be in the right, it felt pretty obvious to me that Iron Man was the antagonist and villain, as his actions are more extreme and harmful. No matter how many times random characters on Tony Stark’s side recounted the phrase “crime is at an all-time low”, I couldn’t believe it, or side with him. I was with Cap all the way. I thought the ending was too abrupt, and I don’t think there was enough character work to lead to the conclusion.

However, one of my biggest issues with the comic is its treatment of women. Civil War continues the traditional ‘boys club’ so present in hero based comics. Almost all of the interesting dialogue and action is given to male characters, and the women are either present for one liners, or they are reduced to stereotypes —the grieving mother, the bitchy boss lady and the emotional wife. Susan Storm makes a very understandable and reasonable decision considering her circumstances midway through the comics (NO SPOILERS). In the form of a letter to her husband, she is given the longest piece of dialogue a woman has in the comic —and yet justifies her actions by stating they aren’t a “cry for attention”. It frustrated the hell out of me to watch all these potentially interesting women take the back seat to give men run of the stage.

Furthermore, the way women are depicted in the art adheres to the stereotypical sexualised style most people have come to expect from comic books. Their torsos twisted in weird angles so you can see both their breasts and their asses in tight latex suits, while the male characters, also in tight suits, seemingly appear to have no penis’ and are made entirely of rippling muscles. I didn’t really like the art overall —a lot of the poses and angles seemed uncomfortable and awkward. Iron Man’s suit looked terrible.

I’m very bitter about this book. Interesting topic with lots of potential, but it was really a let-down overall.

I would not recommend this book to someone unfamiliar with Marvel comics, as it features many, many characters, and makes reference to a lot of backstory. You’d likely find yourself googling names more often than reading. Furthermore, I can guarantee that the comic and the film are going to be incredibly different from each other —so don’t worry about reading the comic beforehand.