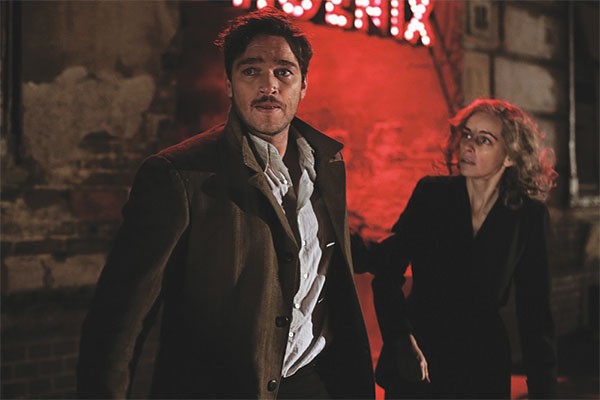 Dark, mysterious, and artistically crafted are some of the many ways one could describe Writer-Director Christian Petzold’s intriguing new mystery-historical film. A refreshing and intelligent sense of insight flows from each frame of Phoenix, a story that, in more ways than one, explores a character whose sense of self doesn’t match her skin.

Phoenix is an arthouse drama set in a Post-WWII Germany about a Jewish woman, Nelly Lenz (Nina Hoss), who receives facial reconstructive surgery after being shot in the face during her time in a concentration camp. After the surgery she emerges slightly too different for her own husband, Johannes (Ronald Zehrfield), to recognise her. She uses this new disguise to work out if he was potentially responsible for alerting the Nazis to her location prior to her capture. From then on the complex and equally entertaining web of deceit and conspiracy pans out. The film calls attention to the roles of identity, social self, and the placement of culture in periods of tumultuous reformation.

The emotional determination of Nelly is performed realistically by Hoss to the point that, despite her intentions on clearing up a mystery, her willingness to accept the truth is tested. Likewise, supporting roles such as Zehrfield’s Johannes elevate the tension and ambiguity both in terms of narrative decision, and a call for active engagement with the viewer. It is a dynamic I both adore and long for in a world of otherwise straightforward mainstream films.

While the film is relatively “artsy,” it is unconventional only in the minutiae. There are the occasional “art-house” moments of long, quiet shots that could appear slow and may throw off the pacing of the story, but if you have an interest in artistic direction you will appreciate the pedantic attention to detial. Even for those who aren’t into arty films, every moment is beautiful. Anyone can appreciate Phoenix’s construction.

Refreshing, perplexing, tasteful, and ambiguous, Petzold’s Phoenix is a strong film to be enjoyed by cinephiles and casual viewers alike. With a powerful allegorical take on cultures following wartime, this mysterious tale is one that should not be missed.