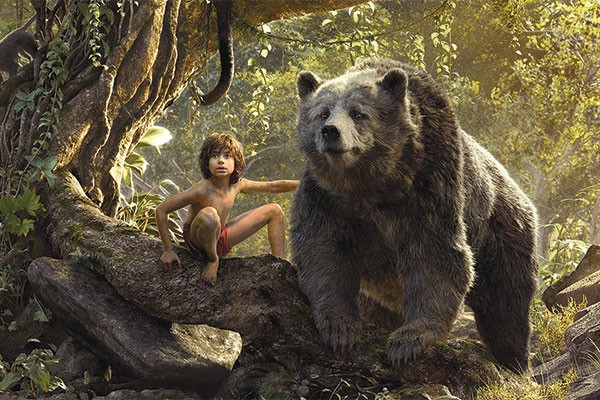 The Jungle Book, directed by Jon Favreau, is a noble re-invention of the whimsical Disney animated version that stemmed from the classic books by Rudyard Kipling.

Raised by a family of wolves in the Indian jungle, the hero of the story, the human boy Mowgli (played by Neel Sethi), is targeted by Shere Khan (Idris Elba), a twisted, vocally divine tiger with a vendetta against mankind. Mowgli must leave his wolf family in order to protect the animals that surround him from Shere Khan’s wrath. He is accompanied by panther pal Bagheera (Ben Kingsley) and bumps into a funny sloth-like bear Baloo (Bill Murray). A film for all ages you say? Whimsical I say? Nay. This film was terrifying and beautifully managed. I wouldn’t recommend a kid under ten see it.

Being the Disney nut that I am, I spent a lot of time gasping and clapping my hands like a toddler whenever something familiar happened, for example, two songs from the old film feature as well as echoes from the old score. This was not a predictable film. There were many twists and shocking scenes I did not expect, probably more true to the books than the old film.

Special mention goes to Christopher Walken as gigantic orangutan King Louie, (I was truly frightened), and to Scarlett Johanssen as hypnotic python Kaa (she didn’t feature enough). Neel Sethi’s Mowgli had charisma and the most ADORABLE lisp, but the star of the film for me was Idris Elba. His rough yet regal voice within that incredible animated animal could not have been done better. The animation throughout the film is gorgeous.

The only issue I had was that the songs were too short, but I couldn’t think of two better voices to sing them (Murray and Walken). Also there was a lack of Indian voices in the cast considering the place in which it is set... but I guess that’s just how the film industry rolls (sigh).