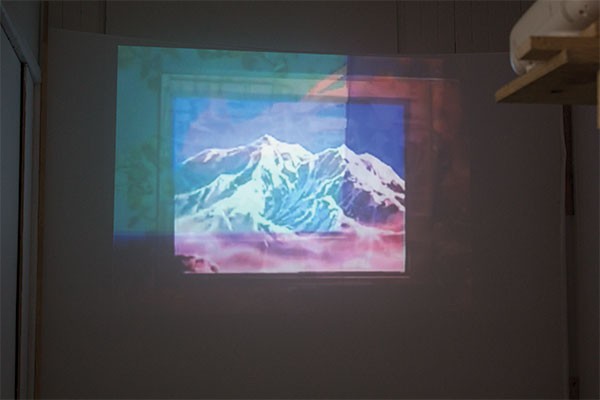 “As well as being good friends we’re artistically compatible,” says Christian McNab on his relationship with collaborator Nikki Cain. Bubblegum Industrial Fashion Shower was an exhibition involving performance, music, painting, video, and garments made by Nikki and Christian. It is the second show they have done together. The shower was last Friday at Albell Chambers Studio, in a venue calls “Geoff’s”.

Nikki and Christian work together to create strange garments with elements of illustration and printmaking. Sometimes Christian will design something and give it to Nikki to draw or paint on, other times she gives him images he screen-prints onto fabric.

“Both of our interests are more than just fashion,” says Christian. “It’s an outlet for our creativity in which we can explore all sorts of different themes.” The pair worked on a bomber jacket Christian made and then gave to Nikki to draw on. Christian says he like “the process of it being unexpected.” When asked if it he gets nervous giving his garments to Nikki to draw on he said “There are some things I’d be precious about if I spent time on it but generally I’m really stoked with whatever she does.” Nikki says, “Our aesthetic is really different but also really similar.”

Nikki’s inspiration comes from “The brain.” She thinks about “dreams and fantasylands, personality, and performance of artists.” Nikki once dreamed she was at an award ceremony for Christian and wanted to wear a big dress that she wasn’t allowed to wear. She told Christian about it and they made her dream dress together.

“I draw faces,” says Nikki. “I always start with eyes, and even if it’s not a human it will end up having little eyes on it somewhere.” A gormless blue visage with visible brain is printed on many of their dresses. “The first time I drew that face I drew this little blue pastel face, and Christian saw it and said, “That’s really cool.” I drew a watercolour one and he took the image and made it big.” The show also featured a video projection by Nikki. She said it is about, “Life. I try to think of heaps of different things and put them all together  —nice things and not nice things.”

Nikki and Christian find inspiration in ‘30s high fashion and couture, such as Italian fashion designer Elsa Schiaparelli who’s clothing often featured faces and surrealist images. Christian’s deluxe bomber jackets are influenced by Seth Price who used bomber jackets as a symbol for the simultaneous timelessness and temporality of fashion.

Performer and musician Horse Dr played their debut show at the fashion shower dressed in Bubblegum Industrial clothing. Christian said the way Horse Dr plays, dances, sings, and reacts “brought the clothing to life and gave it an energy that no one else would have been able to do.”

Horse Dr plans to join Nikki and Christian again to make videos and photo-shoots featuring their garments and artworks.

Check out Bubblegum Industrial clothing at http://bubblegumindustrial.com/ for photos and prices.