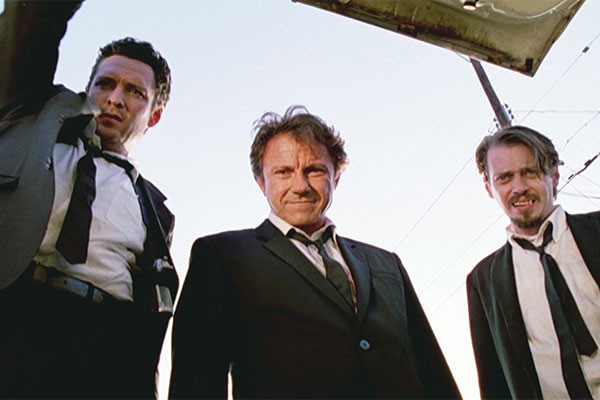 I am proud to say that this is one of the few reviews I have written that is completely unbiased and impartial. And by that, of course, I mean the opposite – this film is just too damned good to be impartial.

At 99 minutes it is the perfect length for nearly any occasion. I often find that while I’m drinking most of the things I say are Tarantino references. I was at a party just the other day and when ‘Stuck In the Middle With You’ by Stealers Wheel came on, and I asked the group of strangers I was talking to if the song made any of them want to cut someone’s ear off. They didn’t get the reference at all, and looked at me like I was psychotic. Suffice to say, I left fairly quickly after that.

In more general terms, this film definitely falls into the ‘Cult Hit’ camp. As the then-little known Tarantino’s first film, it was shot with a budget of only $1.2 million. Fun fact, most of the cast were wearing their own suits and Ray-Bans during shooting, and I think I read somewhere that the car driven by Harvey Keitel was actually Tarantino’s own. But don’t quote me on that. And while the film was only a moderate success at the box-office, following the release of Pulp Fiction in ’94 it rose in popularity significantly and, indeed, notoriety (be warned: it has its fair share of violence).

Following the non-linear structure that Tarantino built on for Pulp Fiction, Reservoir Dogs depicts events either side of a botched diamond heist by an ad-hoc group of men assembled for the job. The script is superb, the cinematography incredibly gripping (albeit relatively modest compared with subsequent Tarantino films), and the cast outstanding, particularly Keitel as Mr White and Steve Buscemi as Mr Pink.

The soundtrack is similarly excellent, reflecting the at times gruesome action with Tarantino’s typically dark humour. While I concede that this film probably not for everyone, definitely suck it and see.