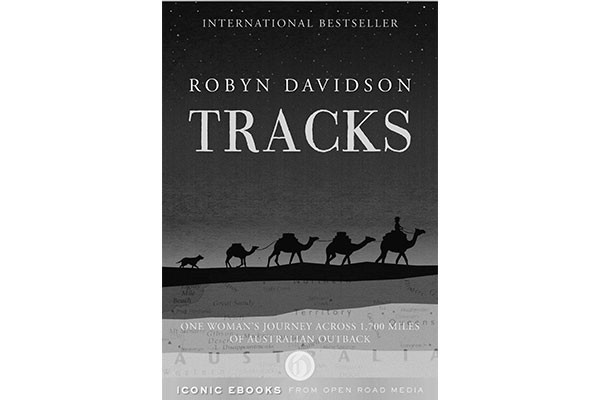 This is the first travel book I have ever fallen in love with. I haven’t read many in my time—growing up in a family of mountaineers makes the climbing books strewn about the house too ordinary to appear interesting enough to devour — and the ones I have perused were always too pretentious, technical and distanced for me to love them.

Tracks follows the extreme journey of one Robyn Davidson, a humble, slightly sassy and completely competent Australian woman as she attempts and succeeds to cross the Australian desert from Alice Springs to the Indian Ocean, a full 1,700-miles, on foot. Davidson does this with four camels (Dookie, Bub, Zeleika, and baby Goliath) as well as her dog Diggity.

Through rough, hot desert days and freezing nights she walks, risking her life passing through uninhabited land where many have been lost, gaining (to her immense disgust) the title of ‘Camel lady’ by tourists and locals she encounters along the way. Davidson’s novel was initially an article in National Geographic, the magazine who funded her trip and introduced photographer and love interest Rick Smolan into the story.

Davidson does not jump into her adventure straight away. She begins at the beginning - with the arrival in Alice Springs, and we follow her struggle to learn and train camels on various camel farms, eventually earning her own animals. Davidson spends the first half of the book (two years) dirt poor, working for money to buy equipment, organising her route, losing camels, finding camels, freaking out and losing camels again. She tells us honestly that what she is doing is a bit crazy, but explains her need to do it is true. The situation Davidson puts herself in is one that probably would not be legal today (the trip was completed in 1977 and took nine months) but reading it makes you want to do it so bad! Or at least something like it. A big fat risky adventure that involves just walking, something we all know how to do.

One of the reasons I adored this book was the way it made such a journey so attractive, but not in a ‘glossing over the rough stuff’ kind of way. We see that Davidson has a horrible time for a great majority of the book, and this is only remedied by the brief bursts of freedom and bliss that she feels once every few weeks. But the ambition, perilous honesty and courage that she performs is something admirable and desirable even to the towniest townie like me.

Davidson writes with a clarity and intimacy that separates her book from other travel narratives. It is personal, does not show off and is even funny at times because she is so blunt. It is a perfect example of someone simply telling their journey with thoughts, feelings and concerns all mapped out for us to follow. Since reading this book I have also developed a slight obsession with camels. Not a bad thing if you ask me, they are amazing animals. Would highly recommend this book for anyone wanting to read something original and escape the city for a short time.