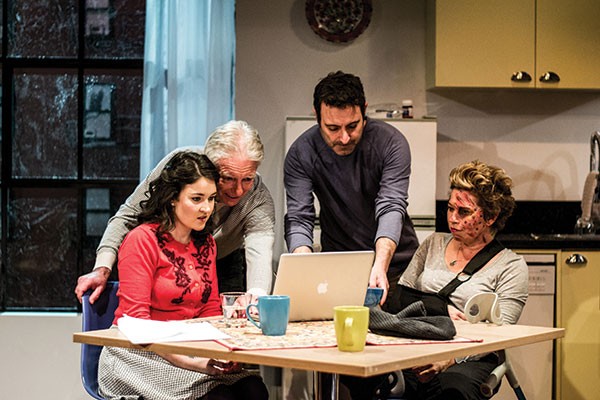 "When you’re looking down that lens, time comes to a stop.”

We all try, in one way or another, to capture some aspect of life and keep it forever; sometimes to preserve it, sometimes to just let it go. Lara Macgregor’s rendition of Time Stands Still, written by Donald Margulies, utilises the cathartic power of theatre to create an emotional story.

Following a life-threatening encounter with a roadside bomb, photojournalist, Sarah Goodwin (Jacque Drew), and her reporter boyfriend, James Dodd (Jeff Szusterman), return to Brooklyn from the Middle East. When they reunite with longtime friend and photo editor, Richard Ehrlich (Peter Hayden), and his new, young girlfriend, Mandy Bloom, (Torum Heng), James and Sarah start to plan a more serious life together. The nature of journalism, ethics, war, love, family and happiness are all woven smoothly into several discussions across this two-hour narrative. This was done with bouts of light comedy and contrasting periods of compelling darkness.

Although the play has only four characters, the scope of the world they live in is portrayed in great detail, which is reflected in the meticulously crafted set. Even in moments of silence, the powerful performances of the two protagonists spoke volumes.

Time Stands Still is fun and thought-provoking. Its small cast tell a larger story, which can be appreciated both in the moment and long after it has ended.