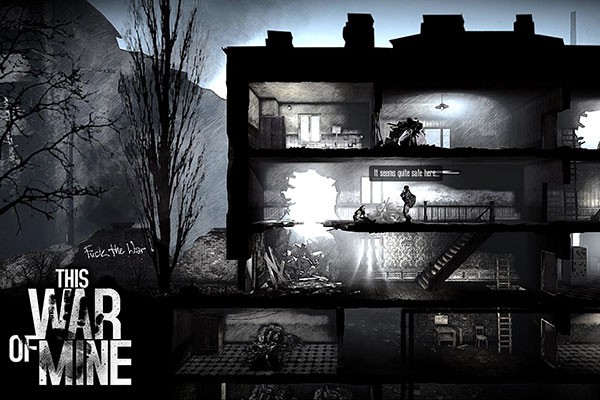 This War of Mine

In the past decade, the video game industry has been disrupted by a revolution of sorts: the medium is being reclaimed from the potent forces of commercialisation. The rise of the independent developer, propelled by advances in digital distribution, the democratisation of software and the community magic of crowd-funding, mean that modest developing teams are no longer bound by the publishing giants and the hard-wired hunt for profit. The genres, game mechanics and themes that triple-A companies won’t touch can now be explored in video games. The award-winning This War of Mine is a telling artifact born out of this radically changing environment.

The brainchild of Grzegorz Miechowski, a pioneer in Poland’s game industry, and built by 11 bit studios, a small Warsaw-based developer team of about 40 employees, This War of Mine is a survival-themed strategy game that focuses on a group of civilians collecting resources, building items and crafting tools to stay alive in a paradoxically beautiful and startlingly realistic reimagining of one of the most brutal post-WWII war crimes in Europe, the 1992–1996 Siege of Sarajevo during the Bosnian War. The civilians caught up in war, their personalities, experiences and raw horror are seldom given a voice in pop war games, and it’s refreshing to see a game where you play as the victim of conflict rather than the invulnerable “hero”.

This War of Mine uses a simple cross-section platformer–esque layout and is illustrated with a unique rough charcoal-style sketchiness. The art doesn’t aim for photorealism but instead builds nightmare-like scenes where time itself is under siege. The soundtrack is just as emotive, albeit slightly tiresome.

This War of Mine plays out in a cycle of two phases. By day, your characters complete chores like laying down rat traps, filtering rainwater, crafting tools, tending to your rudimentary garden and boarding up holes in your shelled-out dingy home. At night, you decide who will venture out to scavenge and who will stay home and guard the house or sleep. There’s a number of locations your nominated scavenger can go. At first you’ll be visiting empty ever-burning family homes, with materials and parts to collect to craft the basics back home, like a fireplace or cooker. As the game progresses and winter approaches, you’ll get more desperate to find food scraps or fuel for your fire.

You’ll come across a range of strangers: the sick and starving, the local priest whom you can trade with, bandits or militiamen who will shoot you on sight and other paranoid and sickly survivors trying to get by. Weapons are scarce and stealth is often the best option. Bring some books, booze and cigarettes home, and your party of survivors will be content for a few days.

The gameplay is unapologetic and a new player will most likely start a new game a fair few times before getting the hang of things. Each character (you start with three) has unique attributes, backstories and needs. Depending on your actions, your characters might be starving, tired, wounded, sick or contrastingly content. Without food or if something terrible happens (like one of the party being murdered), the team will spiral towards catatonia and eventually commit suicide. When someone dies, they die.

This is one of the darkest video games I’ve ever played. It’s a highly challenging, emotional and thought-provoking experience that will test your strategic skills and force you to aggressively contemplate your moral assumptions about war and human nature. Just as importantly, This War of Mine will make you question the direction and purpose of video games altogether.

Tags:   culture games review this war of mine