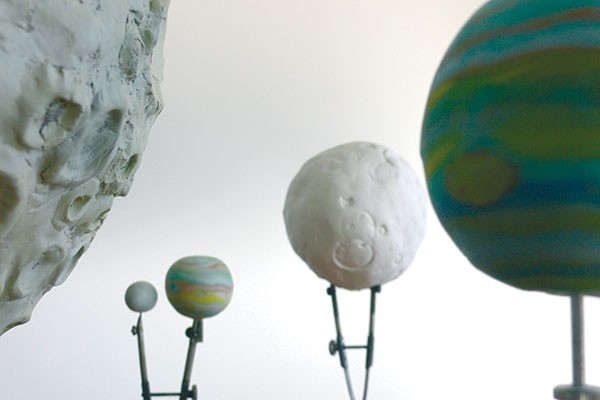 Wanderings Works from the Collection

Collection exhibitions can sometimes feel like a cop out, but if you have a collection why not play with it and put it on show? Following a theme of travel, the works in Wanderings shake off any gathered dust with their depictions of afar, of the other-worldly and of returning home after the adventure is had.

Marking the entrance to the show is a large, aluminium, polished signpost by John Reynolds. Laid on its side and with no locations written onto it, Reynolds’ The Deposition creates a tone of directionlessness — not that of the wayward, romantic traveller but of one who has been forced to leave. Five oilstick-on-paper works by Reynolds in the next room, however, lead this exploration in another direction with an abundance of signs to wonderfully morbid places like “Mt Patriarch” and “Mt Misery”, or utopian nightmares like “Eureka Road” and “Excellent Street”.

The adventure continues with Walter Sherwill’s drawings of India through Victorian eyes enchanted by the exotic.

While Reynolds’ and Sherwill’s works invoke the act of travel, the oval marble maps with streaks of gold and grey in Andrew Drummond’s Mementos from the Crossing symbolise a nostalgia for what once was. The burden of returning home after growing from an experience is realising that no one shares your memories (and many don’t care to either). You will never be able to properly communicate what you have been through and how you have changed. Drummond’s marble maps, each isolated from the other above a floating marble desktop, resound with both the beauty and the deep loneliness that the return home inevitably entails.

But Drummond’s yearning is not the final word in Wanderings. Francis Upritchard and Ani O’Neill’s works in the third room of the show remind us of the future’s potential, of the escape we can find in dreaming and of continuing cross-cultural conversations that do not have to end when you leave one place for the other. O’Neill’s woven florist ribbon blanket hangs from the gallery ceiling and falls partly across the the floor (reminded of local artist Cobi Taylor’s Definitively Unfinished, anyone?). The repeated star pattern in Kua marino te tai (the sea is calm) invokes the artist’s Cook Island and Irish heritage and the traditional use of the sky to navigate the long distance between these two countries.

In a large wooden display cabinet on the other side of the room, Upritchard has sculpted a handful of planets (and a comparatively oversized moon) and stuck them on the ends of map compass points. Orrery II is reminiscent of school astronomy projects and math class, but while school children are encouraged to make realistic replicas, Upritchard indulges in a kind of subversion — reminding even the most straight-laced adults that another type of travel (or escape) involves almost no movement at all.