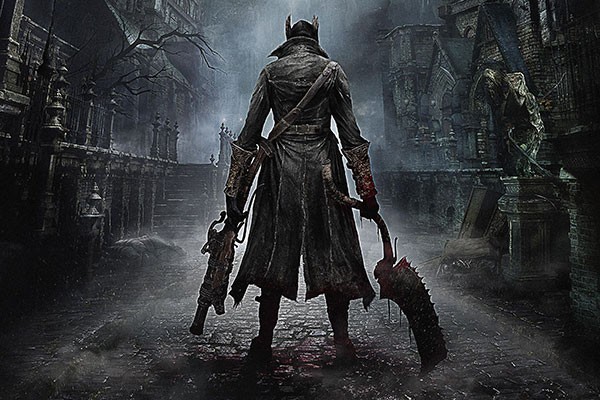 Anyone familiar with From Software’s action-adventure Souls games will know how much of a commitment they are. Rushing into them unawares will lead to frustration and despair, while patience, exploration and a level head will be well rewarded. Speaking as someone who clawed his way through Dark Souls and then swore never to play it again, Bloodborne feels both like familiar territory and something jaw-droppingly exciting and original.

The plot of Bloodborne is very, very sparsely told. You are a cursed individual who has come to the city of Yharnam to find release. Upon your arrival, you undergo a blood transfusion and suddenly discover that the city is overrun with hideous beings who know nothing except violence. You must then take on the mantle of a gun-and-axe-armed Hunter, to either rid the city of the plague that has corrupted it or find a way to escape. Slowly but surely, you gather pieces of information that hint at a Lovecraftian conspiracy to birth an ancient god into the world. The city you are in may not be real: it may all just be a horrible nightmare that you cannot wake up from.

While previous Souls games had an underlying existential-horror element — focusing on the death of the world — Bloodborne goes completely balls out on its horror theme. The aesthetic of this game is soaked in blood, plague and dark magic. Unlike a lot of horror games that lazily use jump-scares, Bloodborne relies on building tension and despair in its haunted environment. This stretches from the gothic environments you fight your way through, to the astonishing variety of hideous, malformed beasts you must slay. Even the items you collect fit in with the theme of blood and death: you purchase items and level up with Blood Echoes, heal yourself with Blood Vials, and reinforce your weapons with Bloodstones. The atmosphere of the game is palpable — the sound design makes for unsettlingly quiet patches between hectic and intense battles, and the music that plays during boss fights induces a feeling of utter panic.

Much like the Souls games, Bloodborne is notable for how difficult it is. However, while the Souls games were only for the dedicated and the insane, Bloodborne is more accessible to new players. The combat system is very fast and fluid, allowing for some mistakes but still punishing you if you aren’t quick enough. Unlike games that continue to hold your hand even after you’ve learned everything, Bloodborne tells you the basics and that’s it — it is entirely down to you to refine your gameplay style. But the game is still fair; it just teaches you indirectly, even if that means hiding enemies behind corners to teach you not to rush into things.

Although you have a decent quantity of Blood Vials to heal yourself with, your health bar is only incrementally worn down by enemies. If you manage to strike back at your enemies quickly enough, you can regain lost health. On top of this are visceral attacks: if you shoot an enemy just as they are about to attack you, they will stagger and leave themselves open to an attack from you that will literally rip their guts out. A huge amount of precision and timing is required, but good god it is satisfying.

If I were to try to level any negative criticism at Bloodborne, it would mainly be about how exhausting it is. It is genuinely difficult to play this game for long stretches at a time without feeling drained. You are on your toes for every second of playtime, from the moment you pick the controller up until you burn out. Playing this game is like struggling in the jaws of a dragon: you will probably die, but you will look and feel awesome doing it.