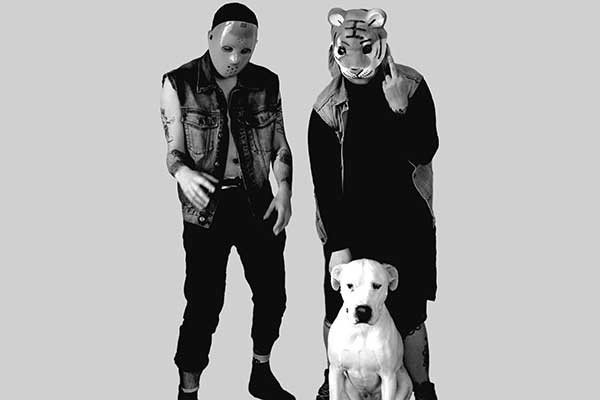 Josh Hunter & Jessie Lee Robertson - As Bad As Me

“My mum knew I’d be fucked if I did anything else,” Josh said when I asked him why he went to art school. Enamoured of popular culture, Americana, comics and tattoos, Josh Hunter and Jessie Lee Robertson aren’t quite like the art school graduates I typically encounter, but that just means they are bringing another, exciting interpretation to the art world.

The Tom Waits title Bad As Me has made a reappearance as the name for a near sold-out show at 13 Vault Gallery. Like the Waits album, the show marks a (re-)emergence for its two featured artists, Josh and Jessie. When the two have shown their works before, it had been at Dunedin’s art school, but as recent fine art graduates they are individually and collaboratively finding their feet within the wider art scenes in Dunedin, New Zealand and beyond. As Bad As Me, organised by 13 Vault’s Nathan Forbes in conjunction with tattoo parlour, Agency Inc, features three works each by Josh and Jessie. “13 Vault is a space for artists who usually don’t have a voice in the typical Dunedin artist community,” Josh comments. “It’s a space that isn’t hindered by expectations on what’s happening in the art world at a given moment.”

By screen-printing digital illustrations, Josh has created three works that depict Evel Knievel in various hellish scenarios. “He was an amazing stuntman but also a real bastard — he was a bank robber and broke guys’ arms with baseball bats because he didn’t like them. This icon was actually a coked-up douchebag.” Josh’s work in this show “connects together to make one world where a portal from hell has been opened in Tokyo and biker gangs are trying to take over humanity.” Despite this growing background narrative, Josh describes it as “a work in progress”.

Jessie’s interest in pop culture, America and female icons is a recurring theme in her work. For her honour’s year, her final work was a large blanket fort made of 576 “screen-printed babes — people I had fallen in love with and had spent eight years watching on my computer, in a different reality with the world”. Jessie also had a project where she drew Instagram-famous people, like Luna Lovebad who has 75,500 followers, and sent the works to them. Her work was reblogged and liked by fervent fans, with one work obtaining about 1200 likes — “I put it up in my toilet,” Jessie laughs. “I think that was my fame, I peaked too early. It’s never going to happen again.”

Josh and Jessie have decided to study design in the hope that they can seek creative career options that will give them the much-needed income to continue their art. As for their other ambitions, the two have plans for more shows. Jessie dreams of collaborating with Lena Dunham and playing herself on HBO show Girls, while Josh would like to have exhibitions in bigger cities and “raise some hell”. “Get radical,” Jessie interjects, then laughs. “But we’re so straight though — sit at home, drink red wine, in bed by ten o’clock.”