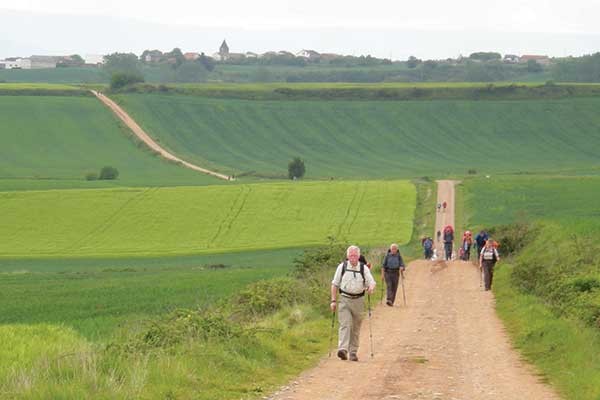 Directed by Lydia B. Smith

As the old saying goes, “it’s not the destination that counts, it’s the journey” — in the case of the 1200-year-old Camino de Santiago pilgrimage, there really is no other way to put it. But while it is the journey that truly counts, it’s nothing without the people who are embarking on it. Lydia B. Smith’s travelogue documentary, Walking the Camino: Six Ways to Santiago, brilliantly captures not only the trail but the pilgrims who choose to travel on it.

Walking the Camino follows the journeys of six groups of pilgrims. While their personalities and backgrounds may differ, these people share a goal: to travel the “Way of St. James” — a 500-mile trek to the shrine of apostle St. James the Great at the Cathedral of Santiago de Compostela in Galicia, Spain. Ranging in age from a three-year-old travelling with his mother to a 73-year-old, the film’s subjects endure hot, cold and windy weather, chronic snoring from lodgers, rationing, exhaustion and other obstacles during their walk.

Following a typical documentary structure, the film’s “cast” of pilgrims discuss their places of origin and aspects of their personal background. While some members explicitly state their reasons for walking to Santiago, others are more hesitant to divulge that information. Smith allows the audience to pay less attention to the journey itself and more to the people embarking on it. As the film progresses, their stories, realisations and enlightenments (spiritual or otherwise) create a surprising sense of poignancy and depth.

Walking the Camino artistically encompasses not only the beauty of the long dusty road, but also the tears and sweat that accompany it — highlighting both the grittiness and the struggle of the individuals striving for some form of deeper understanding of themselves. But, with a runtime of 80 minutes, the exact scale of Camino de Santiago is compressed and heavily minimised so that the audience’s prevalent emotion is sympathy rather than empathy.

With intelligent and thoughtful direction, Lydia B. Smith’s Walking the Camino provides a surprisingly insightful case study of different people looking forward to the same goal — it offers the audience a look into the lives of those who are momentarily part of this journey.