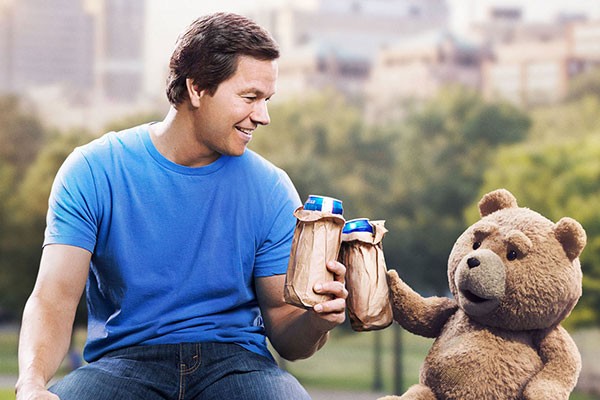 If I described Seth MacFarlane’s sequel to Ted as incredibly masturbatory, I would only be lowering myself to the level of MacFarlane’s tasteless sense of humour. But it doesn’t matter. Ted 2, despite its painfully large budget, provides no inspiration for good taste.

Ted 2 is about an obscene walking, talking teddy bear called Ted (Seth MacFarlane) and his close friend, John Bennett (Mark Wahlberg). John has been divorced for several months while Ted is newly married to Tami-Lynn (Jessica Barth). In order to save their already rocky marriage, Ted and Tami-Lynn decide to have a child. In the court’s eyes, however, Ted is not legally human. To have Ted legally acknowledged as a person in order to validate his marriage and child adoption, the two friends work alongside lawyer, Samantha Jackson (Amanda Seyfried), to have the court’s ruling overturned.

The film is stretched out through its use of “silly” sketches filled with forced humour and displays of excessive swearing in the endless moments where MacFarlane forgot that comedies require actual comedy. The film also relies on distracting the audience from its unlikeable protagonists and inconsistent narrative — which compares a teddy bear’s struggles to the plights of black slaves and civil rights movements — by labelling itself as some form of social commentary or “satire”. This falls as flat as its jokes and is disgustingly disingenuous.

If it’s any consolation (which it’s not), MacFarlane’s dramatic use of cinematography is quite visually appealing, and the occasional shift into a more serious tone allowed the actors to remind the audience that it is not their acting that sucks but the script they have been handed. However, any credit to MacFarlane is flushed down the drain when it becomes painfully clear that Ted 2 is merely an exposition of all of the sponsors who handed him $68 million to make this completely unwarranted attempt to get even more money.