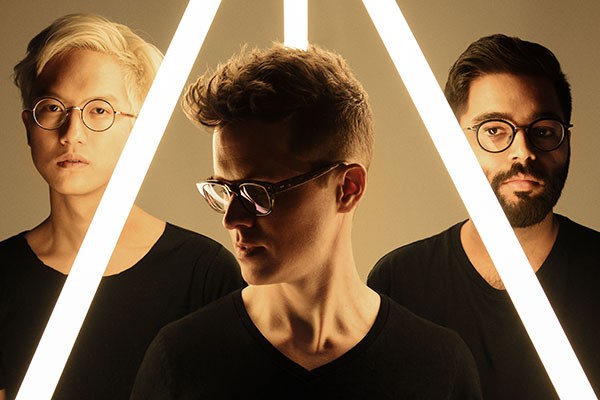 Son Lux is the stage name of American composer, Ryan Lott. Appearing in 2008 with his spine-tingling debut album At War with Walls & Mazes, Son Lux quickly established himself as a force to be reckoned with.

Son Lux’s songs have the deliberate architecture of a classical composer, while also boasting the lush sound palette of an electronic producer. His compositions have a genreless, transhumanist feel to them, where the organic and the synthetic blend softly into one another. His ability to weave live instruments into stuttering electronics is masterful, and makes one think in a strange way of the paintings of Rob Gonsalves. With studio trickery, Son Lux can have instruments warp and bend as though you are looking at them in a funhouse mirror. This could all be dismissed as artsy nonsense if Son Lux’s music didn’t have such a human vulnerability at its core.

As its title and bruise-coloured artwork might suggest, new album Bones finds Son Lux as fragile as ever. What sets Bones apart from Son Lux’s earlier work, though, is just how fleshed-out it feels. Gone is much of the negative space that characterised 2013’s Lanterns. Perhaps his recent collaborations with Lorde and Sufjan Stevens inspired Lott to compose music of a fuller, grander scale.

Bones comes to life with “Breathe In”, a minute-long prologue. “Close your eyes,” he implores in his frail voice. “Swallow the sun. You have only just begun.” A surge of strings engulfs Lott, only to usher in the majesty of the next track, “Change Is Everything”. Bright and beautiful, “Change Is Everything” is probably the poppiest thing Son Lux has ever written. However, its melodic sugar doesn’t come at the cost of Son Lux’s creativity. The song’s keyboard stabs and capricious beats shatter any notions that Son Lux has “gone mainstream”. In this way, the song is a microcosm of Bones as a whole: closer to pop music than Son Lux’s previous work, but still bursting with details and ideas.

Each song on Bones is crystalline and catchy, from the almost Killers-like fluorescence of “Flight” to the gorgeous sadness of “I Am the Others”. The wordless female vocal refrain in “I Am the Others” is perhaps my favourite moment on the album, challenged only by the waterlogged horns on “You Don’t Know Me”. The only song that is yet to win me over is the sleepy “Your Day Will Come”. Forgiving that track and Lott’s limited vocal abilities, Bones is fantastic. It is an album of rich textures and diverse emotions. If I were to sum Bones up aesthetically, I would compare it to the tesseract scene in Interstellar. Beams of light? A sense of geometry? A sad figure that seems to be lost in time and space? Hell, that’s Son Lux all right.