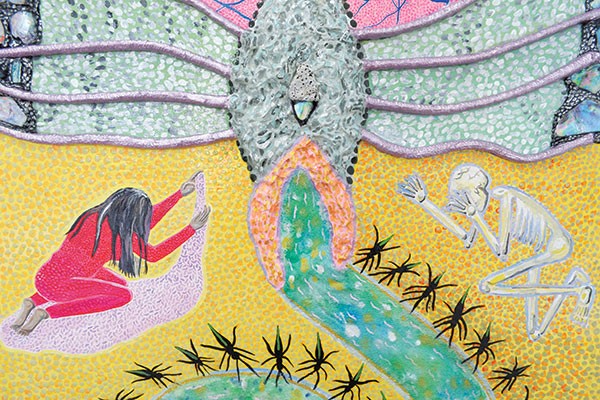 Seeking out the vital bodies in the current Blue Oyster show curated by Georgina Watson is an experience that crosses the disciplines of writing, digital images, sculpture and painting. It is a matter of observing and questioning: is the vitality in the separate bodies of work by the five artists, writers and theorists? Is it in the works’ selection and interactions? Or is it the vital place a show like this takes in the realm of contemporary art in New Zealand?

The vital bodies alluded to in the short poem that stands in for the show’s description seem to be those that exist in moments of tension in nature, just before a drop of water breaks away from a leaf, or before seeds germinate. It is the tension of a beginning — not necessarily of a new life, but of a transition or expansion of a life already in momentum. It is hard to decide, however, if it is this type of vitality that connects each piece or whether the poem is actually an invitation for the gallery goer to step into another realm, another way of thinking.

The first piece I found myself drawn to is the most visually confrontational work in the show. Sam Norton’s two framed screen shots — one of her staring straight on and the other of her hand inserted between the plush cushions of a beige sofa or bed head — are from a film Norton took of herself on her birthday in a hotel room in Samoa. In the first, she looks at the camera in a state of disarray; in the second, her hand inserted into the crevasse between the sofa cushions sexualises the banal sofa.

If Norton’s work alludes to the vagina, this motif has a more explicit, disturbing reappearance as a “giant gaping wound” in Anna Rankin’s text, Get Born Again. Printed and placed on the wall beside Norton’s images, Rankin’s poetry leads to a reinterpretation of the entertaining perplexity and sensuality found in Norton’s work. The power of Rankin’s words taints the exhibition with the deep, resounding pains of being a woman. Holy Child’s emoji-riddled text on the opposite wall also contains a darkness but instead takes a surreal Dunedin as her subject.

With what I interpret as an all-knowing eye and pink lips encircling a mottled green serpent or stream, the vagina takes on a more mystical form in Georgette Brown’s paint and mix-media piece, Painfully Aware at the Moment of Salvation. In the veiny pink and dotted yellow world of Brown’s work, the vagina creature is worshipped by the living and dead as a figure of eternal power and knowledge. Alone, the work may feel overtly ecstatic, but its placement in the show provides another interpretation of femininity that is nicely optimistic.

Initially taking the form of three pages of text on the gallery floor, Wendelien Bakker’s Swimming Pool (like Virginia Overell’s lime- and salt-coated coins “washed” onto the shore of Blue Oyster’s floor) has the potential to remain unnoticed by the gallery goer, who is habituated to looking at things on walls. But Bakker’s work in this show offered the most unexpectedly engaging experience for me, particularly added to by its understatement.

In her text, Bakker describes the process of building a swimming pool just larger than her body in the backyard of her Grey Lynn flat (wonderful photos documenting this can be found online). Her text is evidence of all sorts. It shows the physicality and intricacy of her process but is also evidence of challenging gender roles — interestingly, this is the only work in the show where men have some sort of presence. When buying mortar, Bakker notes, “The man at the counter asked if he could help to put the bag in the car. I tell him I’m walking. It is 25kg. He tells me to have a lot of breaks. I decide not to have any breaks.” In her process, Bakker challenges men who undermine her, peering neighbours and her own body’s endurance to create A Pool of Her Own.

vital bodies traverses a criss-cross of lines that interweave the subtle and explicit, femininity and nature. Georgina Watson has curated an enticing show that requires the gallery goer to engage more deeply, beyond simply being present and browsing, and instead, to seek, inspect, interpret.