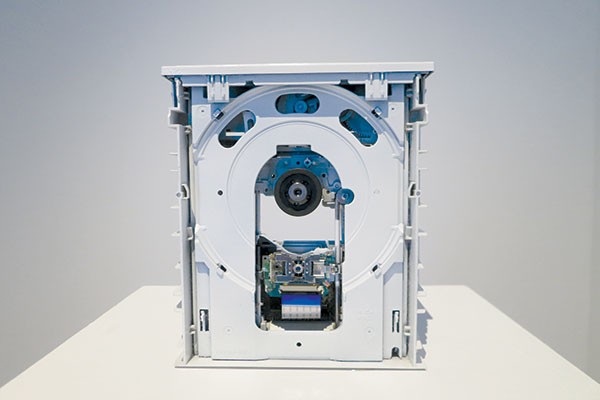 Blue Oyster Art Project Space has been simultaneously stripped back and expanded for Luke Munn’s swfer. One wall in the front room simply has the link “i-chat.mobi/” placed in cursive lettering onto its wall. In the same room, different — seemingly meaningless — letters flashing up on a webpage are projected onto the wall. In the gallery’s second, smaller room is a CD drive presented on a single white stand. A mechanical, shutter-like sound also fills the room. But further engagement and exploration reveals multiple dimensions that come confrontingly close to some of the central anxieties of my generation.

The link written on the front room’s wall, typed into a device connected to the internet, takes the viewer to a chatroom. The chatroom background consists of sugary, abstract patterns — most likely the presumed aesthetic choice of a young girl customising her blog or chat forum background. However, the proceeding (automatic) conversation that the viewer witnesses in this chat space has a much darker element than the bright background colours and sickly cursive font suggest, providing, perhaps, some reasoning as to why the university internet prevented me from revisiting the chatroom because the content was labelled “pornography”.

The chatroom plays through an actual conversation from 2005/2006 between a male paedophile and a decoy posing as a 13/14-year-old girl. These decoys were set up by an organisation that monitors paedophiles online and thus, as Munn describes, involves emulating an identity to seduce someone else. This practice traverses a controversial line between entrapment and protection. The uneasiness of this conversation is only amplified by the witnessing of it on a personal device, cleverly creating awareness of misuse of the internet and a situation of curiosity-turned-fear experienced in the viewer’s private engagement with their screen.

This seediness is echoed in the gallery’s second room. Examining the materials used in the show, I initially missed  “semen”. But it was there — in the drive, apparently. And it makes sense. The male orgasm is a common physical product of seedy online use. The semen is in the CD drive and gets wiped on the CD as it spins around. The sound work filling the room is two channel, a field microphone and a contact microphone, and features an intensified CD drive sound (appropriately named “seedee”). In this room, multiple, interesting interactions are taking place — between the physical product of men consuming online content (like porn) and the sterile machines that exist to enable this. The ceaseless sound humorously connects the mechanical nature of the drive to the male human drive to reproduce. Despite its humour, the critical nature of the works reduces and exposes the viewer as they become integrated into this interaction.

Another element to the show, which I missed, was a performance by Nada Crofskey-Rayner. Crofskey-Rayner walked through the space, listening to profound statements from Tumblr that were run through an algorithm to try to (mostly unsuccessfully) make them into natural language. Crofskey-Rayner had the ability to choose who she interacted with but was restricted to repeating the last phrase she heard when she talked. Munn described this element of the show as a further exploration of the difference between a bot and a body or, in other words, what it looks like to use an algorithm with human agency.

Although the initial “emptiness” of the gallery may make some may feel vulnerable — undecided whether to feel duped or to delve in the space’s emptiness — one should take the time to appreciate how relevant the show is. swfer exposes a plethora of anxieties created by our online engagement by using the human body, online tools and the physical components that allow the online world to run (we still need servers and CD drives to maintain it all). Much like those who create art that solely exists online, Munn relies on the viewer to complete his art. This gives the viewer the power to misinterpret or reinterpret the purposes or concepts behind the work — and reflect on how we use the internet to fulfill our own seedee drives.